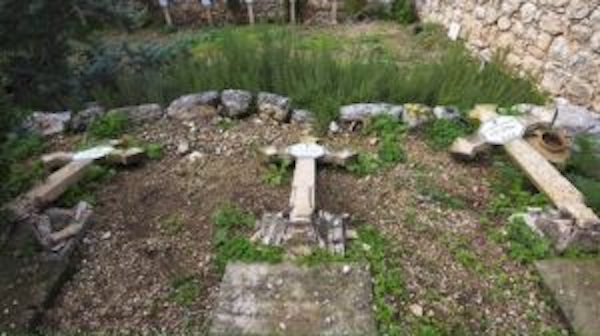 A cemetery belonging to a Catholic monastery outside Jerusalem has once again been targeted by vicious Christ-hating jewish vandals, who destroyed over 30 Christian graves as part of an on-going series of intimidating hate crimes:

The vandals tore down concrete crosses marking dozens of graves at the cemetery belonging to the Beit Jamal monastery, a popular pilgrimage and tourism site, located some 30 kilometers west from Jerusalem near the two of Beit Shemesh. The tombstones were toppled and some tombs were damaged as well.

he damage was discovered by the monks, who visit the graveyard every few days. They believed that the incident was not a mere act of vandalism. “They wanted to smash, to pull down, a symbol of the Christians, the cross,” Father Antonio Scodo, responsible for the upkeep of the Saint Stephen’s Church graveyard, told AFP, calling the incident an act of “desecration.”

Police has opened an investigation into the incident, calling it a “hate crime.” However, it said that the act of vandalism might have actually taken place “several weeks” ago, adding that they had no suspects so far. Meanwhile, the incident caught some attention from the local activist groups, Israeli officials and even foreign states.

The Israeli Foreign Ministry issued a statement, condemning the incident. The ministry’s spokesman, Emmanuel Nahshon, called cemetery’s desecration a “despicable act.” He also said that “Israel is committed to combat any form of hatred and intolerance against all religions.”

The Italian embassy in Israel said it was “shocked and saddened” by the incident and called for mutual respect between religions in the Holy Land. The Polish embassy denounced it as “an unimaginable act of anti-christian vandalism,” adding that its consul in Tel Aviv “has already intervened.”

The site was visited by a representative of the Holy See’s nunciature to Israel and Cyprus, who expressed his hope that this “hate crime will be persecuted by police and clearly condemned by [the Israeli] government.”

Meanwhile, a spokesman for the Latin Patriarchate in Jerusalem, Wadie Abunassar, doubted whether the investigation into this case would be successful. The Israeli security services “failed to bring anybody to justice” following earlier cases of vandalism against the monastery, he said.

“We almost don’t see security and/or educational treatment to this dangerous phenomenon by the state authorities, especially while top officials in the country claim as if Christians are doing very well in it,” Abunassar said, as cited by the Jerusalem Post.

The Beit Jamal monastery, located close to a large community of ultra-Orthodox Jews living in Beit Shemesh, is still said to have good relations with the Israelis who visit it to buy handcrafted ceramics, honey and olive oil, according to the Israeli media.

At the same time, the monastery has also been repeatedly targeted in numerous hate crime attacks over the recent years. In 2013, some people threw firebombs at the facility and spray-painted phrases “price tag,” “death to the Gentiles,” and “revenge” on its hallways.

In January 2016, dozens of crosses at its cemetery were toppled, in the midst of a wave of attacks against Palestinians and Arab Israelis. In September 2017, some vandals smashed a statue of the Virgin Mary, damaged the furniture and broke several stained-glass windows inside the monastery’s sanctuary. The investigations of all these incidents have not led to any arrests.

The condemnation of this “hate crime” by the Israeli government is once-again lukewarm, and the police, with a wink and a nod, will go through the motions of investigating this incident, but no one will be charged or even arrested.  Christians are hated in Israel, and Jews openly persecute Christians with impunity, even going so far as to spit on Christians as they try to enter their churches.  Christian graves are routinely desecrated for the simple reason that hatred of anything to do with Christ has been part of jewish life for the last 2,000 years.  This is the real “judeo-Christian” tradition.

Where is the voice of outrage coming from Christian groups in America?  Why are evangelical Christian Zionists who support Israel to the tune of millions of dollars every year silent about this anti-Christ hatred?  Why hasn’t the U.N. condemned this attack and demanded a full investigation?  The answer is simple: Jews are not capable of committing hate crimes; Jews can only be victims of hate crimes.  And if you object to this hypocrisy, then you must be an antisemite.  After all, if these jewish vandals are brought to justice, it could lead to another Holocaust.