Video Warns Jews ‘Europe Is Doomed!’ – Flee To Israel ‘Before It’s Too Late!’ 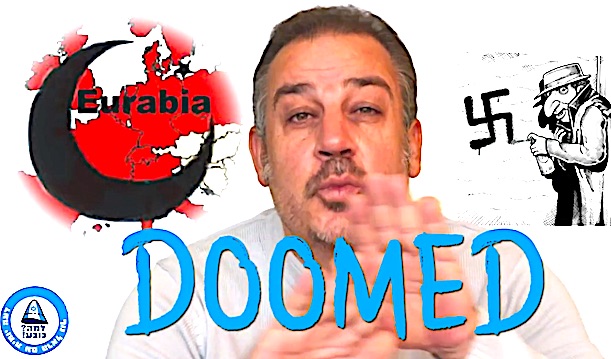 Israeli Actor Harel Noff has produced a video warning diaspora Jews that Europe is ‘doomed’ and that they should emigrate to Israel “before it is too late“:

To all my Jewish blood brothers out there in Europe, wherever you are: For 2,000 years, we’re hated, despised, humiliated, demonized, persecuted, pogromized, and yes, even murdered, while longing, wishing for an independent homeland. The promised land of Israel and Jerusalem.

“So get this: We made it! We’re here! And the question is, why aren’t you? Is your life out there in Europe that jolly and delightful? Is it? Is it worth being there rather than here?

“Can’t you acknowledge that Europe is rapidly changing for the worst and is no longer safe for its Jews? That you must hide your identity for your own safety! Is this the life you wish for your children?

“Our politicians may not be able to tell you what I’m about to because of their delicate give-and-take relations and interests between governments. But I can. Because I don’t owe them a thing.

“So please, listen to me. Europe is doomed. Doomed. Doomed. Leave. Evacuate. A.S.A.P. And come to Israel. Come home. We need you here, and you need us. We’re a growing nation, and together our light will soon shine upon the world bright and clear.

So far their plan to get Jews to emigrate en masse to Israel has failed miserably.  The Jews have admitted they’ve aided and abetted the flood of Third World migrants into Europe, knowing full well that these migrants include millions of ‘antisemtic’ Muslims, who now openly attack Jews all across Europe, making them feel ‘unsafe’, and yet they refuse to leave and go to Israel as planned.

Jews are not really Israelites — they are atheistic Khazar — and Israel is not their homeland.

They are a nomadic, parasitical people who must live off affluent White nations — i.e., Europe, North America, Australia, New Zealand, and South Africa.  It’s much more likely they may have to work in Israel.

Jews really don’t like other Jews; they constantly kvetch about each other, and if they live in Israel, there is no way to avoid their fellow Jews.

Jews prefer to kvetch about the goyim, upon whom they can blame all their problems.  The ‘Holocaust’ gives all diaspora Jews a “Get Out Of Jail Free Card” that doesn’t carry the same weight in Israel.

If the Zionists truly want to create a huge migration of Jews into Israel, not just pedophiles escaping prosecution, they are going to have to do a better job making another fake Holocaust seem imminent, or actually start one.

Why would any Jew in Europe move to Israel which is allegedly being threatened with a nuclear Holocaust from Iran?  They need to get their propaganda machine more consistent.  Too many double-minded mixed messages to make aliyah appealing.