Viktor Orban: Europe Can Be Saved Only By Re-Establishing Its Christian Identity 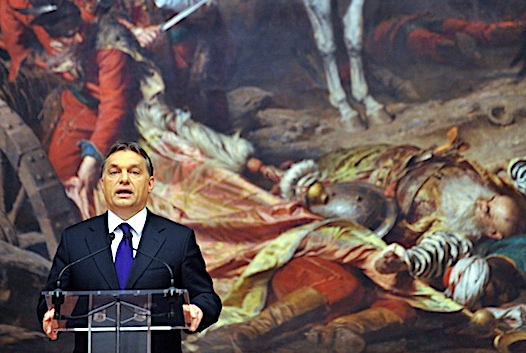 On Tuesday at the opening of an international conference on persecuted Christians, Hungarian Prime Minister Viktor Orban asserted that Europe can only be saved if it “returns to the source of its real values: its Christian identity”:

“Europe is quiet,” Orban said. “A mysterious force shuts the mouths of European politicians and cripples their arms.” He said the issue of Christian persecution could only be considered a human rights issue in Europe, insisting that “Christians are not allowed to be mentioned on their own, only together with other groups that are being persecuted for their faiths.” The persecution of Christians “is therefore folded into the diverse family of persecuted religious groups”, he added…

“It’s not just the people and the communities but also the culture as a whole that is being subjected to an organised and comprehensive attack,” he said. “Even in the land of our culture, our civilisation, the most successful Christian civilisation to date: Europe.” He said this attack was being carried out through “the replacement of the population, immigration, stigmatisation, insults and the muzzle of political correctness”.

Orban said there were many “good and true Christian politicians” in Europe today but they were stymied from openly stating their views due to a mix of constant coalition negotiations and succumbing to the power relations of Europe’s media. Hungary, he said, was blessed with political stability, a public against migration, and a majority that demanded the protection of Christian culture. He said Hungarian politics started from the position that “we Christians have the right to protect our culture and way of life”.

Orban said that unlike many politicians elsewhere in Europe, “we believe people should be encouraged to live and thrive where their ancestors have lived for centuries. So the Hungary Helps scheme is about rebuilding schools, hospitals and dwellings in troubled parts of the world and providing young people with an education at Hungarian universities”, he said.

He said Europeans were wrong to think that the persecution of Christians could never take place in their own country. He said that even though Europe had suffered at the hands of terrorists several times, “many Islamic State soldiers” had come from western European countries while “Islamic masses” had migrated to Europe illegally and unchecked. Demographic forecasts indicate that the religious and cultural proportions in some European countries will change rapidly, he said, adding that Europe could only be “saved” by re-establishing its Christian identity.

Of course, the “mysterious force [that] shuts the mouths of European politicians” which Orban mentions is Jewish Power, and there’s really nothing “mysterious” about it.  Jewish Power is by definition anti-Christ.

Western Europe has arrogantly decided that it can somehow survive without its Christian identity, culture, and faith, replacing those with paganism, identity politics, and so-called civic nationalism, all of which play right into the hands of Jewish Power.