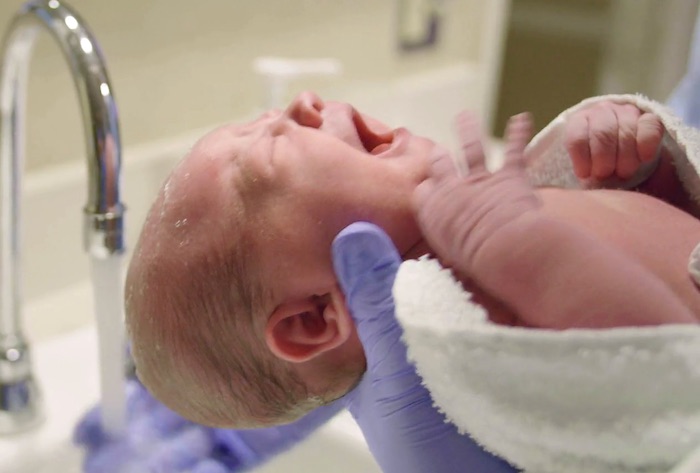 Video has surfaced of Democrat Kathy Tran in the Virginia House of Delegates proposing a new bill that would allow abortions through the end of the third trimester, up to and even after birth:

Virginia Gov. Ralph Northam (D.) commented Wednesday about a controversial 40-week abortion bill and in so doing said the law allows an abortion to take place after the infant’s birth.

A Democratic lawmaker in the Virginia House of Delegates proposed a bill Tuesday that would allow abortions through the end of the third trimester of pregnancy. The video of Delegate Kathy Tran presenting her bill led to an exchange where she admitted that her bill would allow for a mother to abort her child minutes before giving birth.

“How late in the third trimester could a physician perform an abortion if he indicated that it would impair the mental health of the woman?” Majority Leader Todd Gilbert (R.) asked.

“Okay, but to the end of the third trimester?” Gilbert asked.

“Yup, I don’t think we have a limit in the bill,” Tran said.

Tran responded that is a decision between the woman and her doctor would have to make. Gilbert asked if her bill would allow an abortion right before the infant was born.

“My bill would allow that, yes,” Tran said.

So basically the new bill would allow a woman to give birth and then tell her doctor that she’s seriously “depressed” about it, and that would give the doctor the greenlight to abort the child?  Who thought up this brilliant scenario, Satan himself?  Just when we thought we’d seen it all with the passage of New York’s recent liberal abortion law, they take it even a step further in Virginia.  The sponsors of the bill could not have possibly believed that this would get passed, so why do it?

What the liberals are doing here is pushing the “overton window” on abortion further to the Left.  That is, they include this radical and sickening proposal as part of acceptable dialogue on abortion, and by doing so, anyone to the Right of this position seems reasonable.  This strategy is employed by Liberals all the time.  Admitted communist Bernie Sanders runs for President, so that “moderate” socialists like Hillary Clinton no longer sound like Karl Marx incarnate.