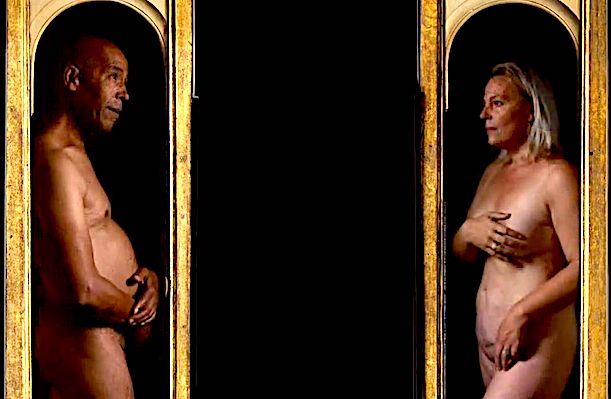 Couples of all races and sexual orientations are being encouraged to be virtually integrated into the historic 14th century Christian Altarpiece painting by the Van Eyck brothers, as a part of a Tourism Flanders promotional campaign in Ghent in 2020:

Tourism Flanders launched a video in which the painting “The Adoration of the Mystic Lamb” can be seen, but in which the naked Adam and Eve are replaced by ordinary couples. These are people who are already participating in the campaign on the occasion of the year 2020, which will revolve around the Flemish painter. “We hacked the painting, if you think about it,” said Stef Gits of Tourism Flanders, reports VRT NWS.

The organization is making an extra effort to include all kinds of couples in its campaign, and does not want to attract only traditional couples like Adam and Eve. “Couples from the LGBTQ community, people of colour, people with a disability. Everyone is welcome. The campaign is an ode to love, in all its shapes and forms,” Gits added.

Adam and Eve are depicted naked, but covering their genitals in the painting. Participants are allowed to do the same, but nudity is not mandatory. Photos with dressed people are just as useful, the organization stressed.

People who want to take part can send in pictures or videos via the campaign website, adorationoftruelove.com. With the campaign, the organization also aims to attract tourists to Ghent, both to view the real version of the painting and to visit the other exhibitions and events that will be organised in honour of Van Eyck.

Belgium is one of the most arrogantly liberal, atheistic, and self-destructive formerly Christian nations in Europe.  The tiny nation will be one of the easiest to sacrifice on the altar of the jewish New World Order.

It’s historic Christian gothic cathedrals have been all but reduced to the status of tourist attractions to be gawked at by racially diverse hordes looking to be amused for twenty minutes on a walking tour.

Jan Van Eyck was a deeply Christian artist, but rather than ‘honoring’ him, this appropriation of his sacred work makes a mockery of his God-given genius and faith.

But the ‘sophisticated’ Belgians have abused this masterpiece of Christian art before, using it as a back drop for live performers to simulate the sex act in front of children for “educational purposes,” as we’ve previously reported.

Not to worry, though: we’ve been reassured by the jewish ‘conservative’ Dennis Prager that Adam and Eve had no racial identity, and this radical liberal “art project” in Belgium is perfectly consistent with his ‘conservative’ and jewish take on the Bible.