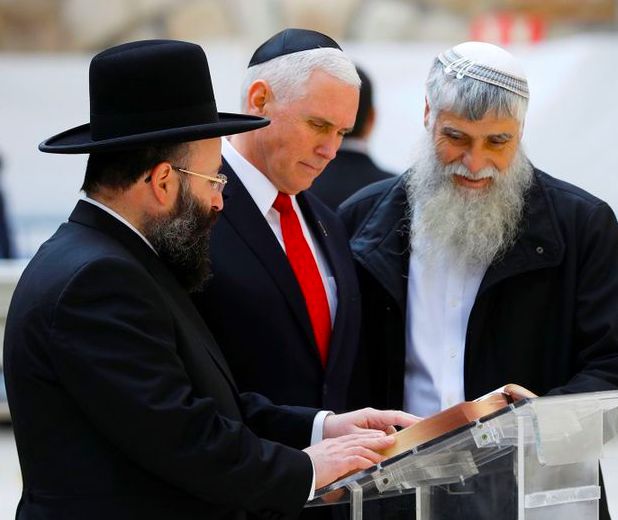 In defense of our “good friend and best ally” Israel, our jewish Vice President Mike Pence warned that the “antisemitic” Iranians want to build nuclear weapons so that they can holocaust “another” six million Jews:

Administration officials have long used strong rhetoric on Iran, but the speech marked a first for alleging a so-called genocidal plot.

Speaking of a visit to Auschwitz planned for today Pence began, “anti-Semitism must be confronted, wherever and whenever it arises, and it must be universally condemned.” Turning his attention to Iran, he continued, “But beyond its hateful rhetoric, the Iranian regime openly advocates another Holocaust and it seeks the means to achieve it.”

The gathering in Poland was attended by officials from 60 countries. Pence pleaded a case for Europe to adopt sanctions and abandon JCPOA, the 2015 Iran nuclear deal.

Pence referred to the agreement as a “devil’s bargain with our common enemy.”

He argued the nuclear deal “did not prevent Iran from obtaining a nuclear weapon. It merely delayed the day when that vile regime would gain access to the world’s deadliest weapons.”

“The time has come for our European partners to withdraw from the Iran nuclear deal and join with us as we bring the economic and diplomatic pressure necessary to give the Iranian people, the region, and the world the peace, security, and freedom they deserve,” Pence said.

Using religiously coated language, Pence closed his talk with an invocation for action against Tehran.

“I believe with all my heart we can claim that blessing anew for all the people of this region and the world for ourselves and our posterity. If we claim it with faith and we claim it together, I believe God will surely bless us with peace,” Pence said.

Later in the day Secretary of State Mike Pompeo, who is also in Warsaw, was asked if Pence was able to make any inroads with Europe. Pompeo told Radio Farda, “There’s clearly differences on how to attack the problem. The Europeans are wedded to the JCPOA.”

When asked directly if the U.S. aimed to corral support for regime change in Iran, Pompeo repeated a mantra of senior officials in the administration over recent weeks, “We want a change in the regime’s behavior.”

The specter of American interest in ousting the Iranian leadership hightened yesterday after Israel’s Prime Minister Benjamin Netanyahu said he wanted “war with Iran.” The comment was made to reporters outside of an official session and released in a video that has since been deleted from social media by the Israeli government. An updated translation was later released where the prime minister called for “combatting Iran” and its aggression.

Sadly, millions of Americans actually believe Israeli lapdogs like Pence when they make outlandish claims like the Iranians want to build secret nuclear weapons so that they can get every last Israeli Jew in another antisemitic Holocaust.  And what explanation do they give for Iran wanting to do this?  Apparently, Iranians are just filled with irrational Jew hatred, and they are so blinded by their antisemitism, that they won’t stop until they’ve incinerated every Jew in Israel.

Every Muslim in the Middle East wants to destroy Israel and all of its Jews, and every White Christian in Europe and America wants to round up Jews and put them in gas chambers, for no other reason than everyone has nothing better to do than to hate Jews all day long.  How could a people who are “obviously” a “light unto the nations” be so universally reviled for no reason?  Jews, as beacons of morality, have never done anything that could possibly justify even the smallest of criticisms, and yet every day there is a new Holocaust looming on the horizon.