Were 4 Oil Tankers Blown Up in the Straits of Hormuz As Part of a Israeli False Flag Operation? 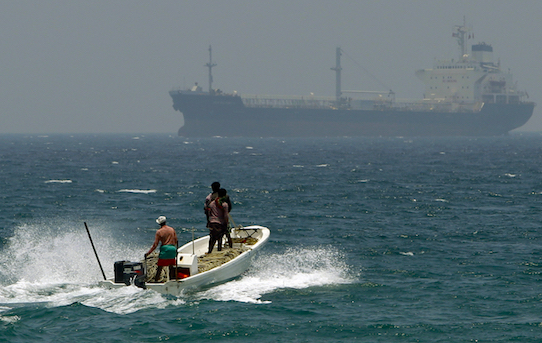 Four commercial vessels were targeted by “sabotage operations” near the territorial waters of the United Arab Emirates without causing casualties, the foreign ministry said on Sunday, without giving details of the nature of the sabotage:

The incident occurred near the UAE emirate of Fujairah, one of the world’s largest bunkering hubs which lies just outside the Strait of Hormuz, the ministry said in a statement.

The strait, a vital global oil and gas shipping route, separates the Gulf states and Iran, which has been embroiled in an escalating war of words with the United States over U.S. sanctions and the U.S. military’s regional presence.

“Subjecting commercial vessels to sabotage operations and threatening the lives of their crew is considered a dangerous development,” according to the statement that was carried by state news agency WAM.

The statement, which did not identify the vessels beyond saying they were of various nationalities, said the incident did not result in spills. The UAE did not blame any country or other party for the operation.

Regional tensions have increased, with Washington saying it was sending a U.S. aircraft carrier and other forces to the Middle East due to what it said were Iranian threats, while Tehran has called the U.S. military presence “a target” rather than a threat.

The U.S. Navy’s Bahrain-based Fifth Fleet told Reuters it was aware of the UAE report but referred queries to the UAE authorities.

Israel and its rabid pro-Zionist supporters in America, which includes deep-pocketed Christian evangelicals, have been pressuring the Trump administration to “neutralize” Iran in a military conflict, but in order to get the American public behind such a suicidal agenda, a “cause belli” will have to be concocted, like the fake Gulf of Tonkin attack during the Vietnam War, and many observers believe that the next major false flag event could occur in the Straits of Hormuz through which a huge percentage of the West’s oil passes through.

If America’s supply of oil is “threatened” by these “attacks” which will be blamed on “radical anti-Israel, pro-Palestinian Muslims” in Iran, it will have no choice but to attack Iran to neutralize this terrorist threat to America’s interests.  Israel would like nothing more than to take complete control of the Straits of Hormuz and thereby control the world’s oil supply, and that dream is within reach, and may be only a few simple false flag attacks away.

Press TV hosted E. Michael Jones about these developments, along with a Jew Eric Wahlberg, who, predictably, blames “ISIS” for the attacks: