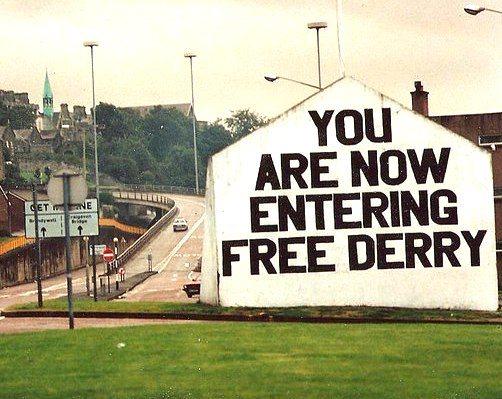 An Israeli-born journalist, Tuvia Tenenbom, went into a pub in Derry, Northern Ireland, and provoked some drunken patrons to make humorous and disparaging remarks about Jews and Israelis on video which has caused a stir:

DUP leader Arlene Foster has described her disgust at a video in which a man in Derry, Northern Ireland, says he supports Palestinians “because of the f***ing Jews” and says Hitler “didn’t kill enough” of them.

[Tuvia Tenenbom] visited a pub to speak to a group of men at the bar about why they support Palestine.

After a brief conversation, Mr Tenebom mentions the Palestinian flags and one man at the bar says: “The only thing that Hitler didn’t do wrong – he didn’t kill enough f***ing Jews… Jews are the scourge of the earth.”

Others laugh as he says this.

“The small Jewish community in Northern Ireland will always have my support and that of all right thinking people,” she said.

Mr Tenenbom started by asking the men about their views on Brexit and then pointed to “a lot of Palestinian flags on display”.

The answers included “because of the Jews,” and “the Israelis, they kill children.”

Why are Jews so shocked to find that even in a remote, local pub in Northern Ireland there are moral people who are outraged by the way the Israelis are committing genocide against the Palestinians and at the same time claiming that they are the ‘real’ victims?  Israel is one of the most unpopular countries among liberal Europeans, and no “inter-faith dialogue” or pro-Zionist blogging armies in Tel Aviv will change that attitude.

And of course this Irish politician, Arlene Foster, isn’t “disgusted” with the Israeli slaughter of Palestinian women and children, but she is “disgusted” that an Irish citizen has the gall to ridicule the Jews for their hypocrisy.  People will no longer be cowered into silence by the specter of cartoonish “gas chambers” and “Nazis”, terms which have become so indiscriminately over-used that they literally have lost any meaning that they may have had in the past.  If Jews feel the need to report on Hitler jokes in small Irish pubs, they have truly lost the argument, and their collective minds.