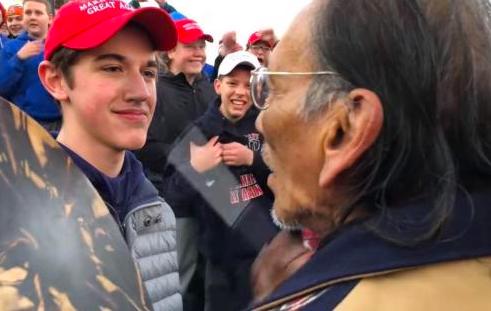 Not only are White people under constant scrutiny for the racist “micro-aggressions” that come out of our mouths, but we now have learned from the recent events at Covington High School that Whites are also expected to make sure their facial expressions don’t offend minorities or other people of color:

If you had any doubt left that we have entered crossed the Rubicon into sheer madness, then look no further to the media feeding frenzy over Covington Catholic High School student in a non-confrontation with American Indian elder Nathan Phillips. In short, the hacks, fraudsters, propagandists and thought crime police created a media firestorm over the expression on a kids face as an old man beat a drum…

George Orwell gave the world a prophetic warning about how government and state control of culture could lead to a world where people gleefully participate in their own totalitarian enslavement. A world where everyone is afraid to speak whatever truth is on their own mind, and a world where the punishment for thinking outside of the box is rather severe.

The Covington incident reveals a shocking devolution in society, and now, as Orwell predicted, having the wrong expression on your face when the all-seeing eye of big government and the culture police look at you can have severe consequences, possibly even bringing physical harm or even death.

Of all the frightening ideas in 1984, there is one little gem in there that is mentioned only once. Facecrime.

“His earlier thought returned to him: probably she was not actually a member of the Thought Police, but then it was precisely the amateur spy who was the greatest danger of all. He did not know how long she had been looking at Free eBooks at Planet eBook.com 79 him, but perhaps for as much as five minutes, and it was possible that his features had not been perfectly under control. It was terribly dangerous to let your thoughts wander when you were in any public place or within range of a telescreen. The smallest thing could give you away. A nervous tic, an unconscious look of anxiety, a habit of muttering to yourself—anything that carried with it the suggestion of abnormality, of having something to hide. In any case, to wear an improper expression on your face (to look incredulous when a victory was announced, for example) was itself a punishable offence. There was even a word for it in Newspeak: FACECRIME, it was called.”

The real “face crime” that Whites will never be able to avoid is the face that their faces are White, which all non-Whites are being trained by the jewish-controlled media to associate with oppression and racism.  Even if you have the wrong expression on your face, you risk eliciting “justified” anger and even violence from “historically oppressed” people of color.  Everything that has ever gone wrong in their lives is the direct result of White privilege, colonialism, and racism.  So it’s no wonder that just the sight of a White face with any expression on it can trigger a mental meltdown.

Whites need to spend an hour every day studying their own faces in the mirror and try to eliminate any expressions that might be misconstrued by people of color as “aggressive” or “condescending” or “entitled”.  Only Whites can be accused of a “face crime” for the same reason that only Whites can be “racist”.  All anti-social and even criminally violent behavior on the part of non-Whites is not their fault; if it weren’t for Whites, all people of color would be walking and talking reincarnations of Mahatma Gandhi.