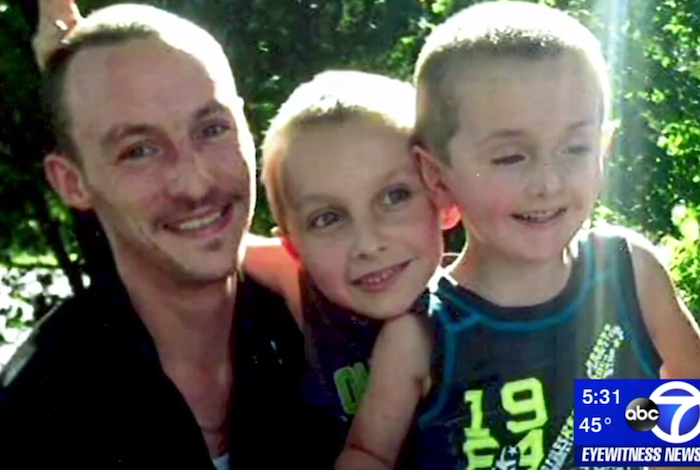 Donna Augustine is fighting for justice after her son, Steven, was nearly killed in a brutal assault that led to only a misdemeanor charge against the Black suspect, Charles Miles:

Donna Augustine visits her quadriplegic son in the hospital every day since he was assaulted back in May.

Steven Augustine, a father of two, was walking home from work late at night when he was attacked near a Kingston bakery. The beating left him paralyzed and on a ventilator.

“He doesn’t know us,” Donna Augustine said in an exclusive interview with 7 On Your Side Investigates. “He doesn’t respond to anything. Basically, he is missing the whole left side of his brain.”

She reached out to 7 On Your Side after the assault led only to a misdemeanor charge against Charles Miles, who is now serving a 10-month sentence. Miles has past drug convictions and reportedly got into a fight with Steven Augustine over money.

Ulster County District Attorney Holley Carnright says that since Miles did not intend to cause serious physical harm to Augustine, his office could not bring felony assault charges against him.

Carnright says it was the fall backwards that caused Augustine’s serious head injury.

It is an unacceptable determination for Donna Augustine.

“I just can’t believe this has happened, and these people are allowed to do something like this and get away with it,” she said.

In an interview with 7 On Your Side, Carnright insisted the law did not allow for a felony charge.

“It was a situation where one person punched another person, and there was no way for us to determine the intent to commit a serious physical injury as a result of that conduct,” he said.

But Donna Augustine insists you need only look at her son to know that doesn’t make sense.

Medical records show he suffered at least four separate skull and facial fractures. And in another record, the doctor wrote “traumatic brain injury,” which indicated a strike with a “baseball bat.”

Donna Augustine thinks a surveillance video of the attack could answer a lot of her questions, if only she were allowed to see it.

“I want to know what happened to my son,” she said.

She has made repeated attempts to see the videotape, and after numerous phone calls and letters to Carnright, she received a letter stating, “The records you seek are not maintained by this office. Your request has been denied.”

“Of course they have the case file with the video,” former Brooklyn prosecutor David Schwartz said.

Schwartz says that if Carnright is so certain the evidence supports only a misdemeanor assault, then why not show the mother the video?

“None of this makes any sense,” he said. “On the face of it, it looks like they’re hiding something. What are they hiding?”

When pressed as to why he had denied the victim’s mother access to the tape, Carnright admitted he could show her but had no explanation for not doing so. Instead, he insisted we leave his office.

“Do you have any other questions?” he said. “Thank you. We’re done here.”

Donna Augustine believes her son’s attacker is getting special treatment, because just weeks after the attack, one of the investigators hinted that Miles might have helped the police and DA as an informant.

“He said that there was a person that was present at the assault that has worked with the police department for many years and was very, very trusted,” she said.

Carnright refused to answer whether Miles might have been an informant.

“You have to leave now,” he said, as he pointed us toward his office door.

If the roles were reversed and it was a Black man in a vegetative state because he was beaten by a White man, this would be a national crisis, but it doesn’t fit the jewish narrative so Mr. Austin will be forgotten except by his family and a few racially aware White people.  If the perpetrator were White, the FBI would be involved, and his computer would be seized to find out if he frequented “white supremacist” websites, but because Charles Miles is Black, what he views on his computer is “private” and “irrelevant” to the nature of the crime.  But just turn on any television, and you’ll see why Blacks are incited to racially hate White people — it’s not just on the internet.

The D.A., of course, is lying when they claim that there’s no proof that Charles Miles intended to severely beat Mr. Augustine — the fact that Mr. Augustine is now a vegetable is proof of this animal’s intent.  It’s hard to believe that Miles “accidentally” turned Augustine into a vegetable.  And they won’t release the video of the beating because they know it would prove what an animal Charles Miles really is, and it might wake up White people to what’s really going on in this country.

In reality, Charles Miles and all Blacks in America are taught every day by the jewish media that they are victims of White racism, so every time they see a White person, they are enraged and want to lash out.  And as we can see from this case, they are no longer deterred by the legal system which is there to protect Blacks not White people.  And these “senseless” attacks against Whites will continue as long as the Jews are allowed to propagate their racial animus toward Whites in the media.