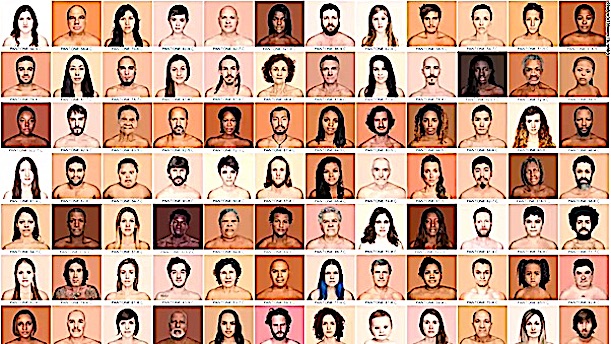 In a recent essay that appeared in the Algemeiner, ‘historian’ Harold Brackman, like many Jews, seems very confused about whether or not Jews are White –but one thing he’s absolutely clear about is that Jews should ‘collaborate’ with non-White minorities to help turn America “beige”:

As critics have noted, American Jews today are often characterized as “white” when talking about race. Not only is this narrative inaccurate — it’s also dangerous. Religious hate crimes against Jews far outstrip those of any other community in the US, and have often turned deadly. Characterizing Jews as “white” minimizes the Jewish experience and the threats and discrimination Jews have experienced in this country ever since its founding.

How Jews “became white” — or perhaps “white but not quite” — in America is historically complicated.

In 1800, the handful of Jews in this country were generally considered “neither white nor black” — but in between, and possibly a race of their own.

Beginning around 1900, American Jews may indeed have come to be viewed — and to view themselves — as “white.” If so, the causes may have been second- and third-generation Jews abandoning the “foreign tongues” of their parents, while also leaving Orthodoxy for forms of Judaism (or secularism) that allowed them to blend into the American scene more easily. They also abandoned Jewish tenements and slums, and moved up into the middle class. To be classified as “white,” they actually had to do little, because that’s how the US Census began classifying them around 1930.

Still, there were horrible instances of antisemitism all through this period — ranging from the deadly to the commonplace discrimination and formal and de facto bans at country clubs, universities, and more.

But some radical practitioners of “Jewish whiteness studies” — including such Jewish scholars as Michael Paul Rogin, Karen Brodkin, Matthew F. Jacobson, and Eric L. Goldstein — have argued quite differently. They suggest that Jewish immigrants and their children embraced “whiteness” as a way of asserting their superiority over other races.

That’s a sham and a farce — as anyone who has studied Jewish and Black solidarity during the Civil Rights movement will tell you.

But the demographics of this country are changing. Today, African-Americans are increasingly outnumbered by Hispanic Americans, whose racial identities are often ambiguous. Asian-Americans are also on the rise — though perhaps not at Harvard and other elite universities because of hidden quotas against them. Are American Jews today actually so obsessed with being “white” or are the “whiteness scholars” and others like them so intent on never seeing beyond the color of someone’s skin?

It’s also true that a large and growing community of Black Jews are demanding the recognition and acceptance they have long sought. The same holds true for Mizrahi Jews — whose numbers are exploding both in Israel and here in the US. One wonders if they appreciate being told by academics — almost all “white Jews” with a leftist political agenda — that “whiteness” has become the norm for Jewishness in this country.

Perhaps Jews should reject feeling guilty about being “white” and grapple instead with how to collaborate with other minorities in helping shape the new “beige” America.

From studying our history — and today’s hate crime statistics — it’s clear that Jews are not part of the “white privilege” set. And maybe Jewish professors should examine their ideological pursuit of “whiteness studies” and what it reveals about them.

So — his narrative goes — when the U.S. Census — for unknown reasons — decided that Jews were “White”, Jews just went along with it because they wanted to be seen as White — because they wanted the benefits of living among Whites in nice White neighborhoods in the suburbs, not with the Blacks who had taken over most inner cities where Jews historically lived.

What Brackman conveniently fails to mention is how powerful Jews — like the B’nai B’rith secret society — actively fought the U.S. Census takers in the 1920s from finding out just how many Jews had flooded into America in the late 19th and early 20th centuries — those “tired, poor, huddled masses yearning to breath free” were largely Jews from the ghettos and shtetls of eastern Europe.

It was these Jews themselves who used their influence so that the U.S. Census did NOT have a separate racial category for Jews — because they knew how White America would react if they ever found out how many Jews had wormed their way into America over that period of time.

And now 100 years later, these “white passing” Jews — with Bolshevism in their veins — have all but replaced the W.A.S.P. elite — the ‘natural aristocracy’ of America — they have indeed become the new “white supremacists” who flaunt their “white privilege” — while at the same time use the non-White minorities to destroy their competition for supremacy — real White Americans.

But Jews are playing a dangerous game — they have fomented racial animus among Blacks to hate their White “oppressors” — and those revolutionary Blacks don’t differentiate Jews from Whites — which means many Jews will become victims in this racial shell game.

Jews believe that it is their best interests that the White race drowns in the Third World racial tsunami that they’ve intentionally created — and have openly admitted that it is not a ‘conspiracy theory’ that they are behind it.

Yes, in the coming Judeo-America, beige will indeed be the “new White” — but a racial caste system will remain — like in India, Cuba and Brazil — with a “white passing” Jewish elite, of course, at the top of the pyramid — exactly as it was prophesied by Richard Coundenhove Kalergi 100 years ago.