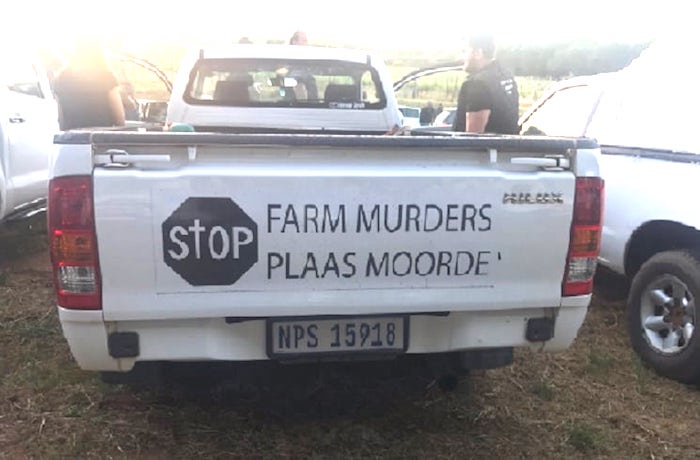 For those who claim that many of the farm invasions which resulted in murders of South African Whites were actually routine robberies “gone wrong,” the available crime statistics prove otherwise:

The scourge of farm murders has become one of the biggest hot-button issues in South Africa, accelerated somewhat by the uncertainty regarding land expropriation…

We’ve taken a look at the official government statistics on farm murders, and a few things surprised us: Some for the better, some for worse. Here’s what the crime stats for 2017/2018 suggest is happening:

From March 2017 – March 2018, official SAPS data suggests 62 people have been killed on their farms. AfriForum previously claimed that 109 farm attacks took place between January – March 2018. However, the crime stats suggest that only 108 attacks have taken place over the last year.

When farm invasions get underway, the statistics say they are most likely to end in murder. The 62 killings from 108 attacks gives us a 57.4% mortality rate. A further 30.5% of incidents result in burglary, whereas 5.55% of farm crimes play host to attempted murders.

There was a total of 20 336 murders in South Africa last year – which hasn’t got any easier to digest during Tuesday – and farm murders only make up a small, but significant percentage of the numbers. For context, you’re more likely to be killed by a panga than murdered on a farm.

Given that nine murders came from seven confirmed incidents with fatalities, Limpopo is where farmers are most likely to be one of “multiple victims”. Now, the numbers aren’t that high so there isn’t much to go on, but 23% of these crimes claim at least two lives or more.

No obscuring the fact that this article has an agenda to minimize the severity of the problem, going so far as to suggest that farmers are actually quite safe when compared to the general public.  But the general public doesn’t live on isolated farms — and to compare the two is absurd, but it’s done to exonerate the violent Blacks.

And these numbers clearly show that what motivates Blacks to invade White property isn’t robbery as much as murder and mayhem — Blacks are easily incited by their leaders to violence because of their low intelligence and high level of impulsiveness.  And they don’t carry out merciful killings — rather there is an obvious sadistic nature to the violence — the Blacks enjoy seeing Whites suffer.  These numbers make that painfully obvious.