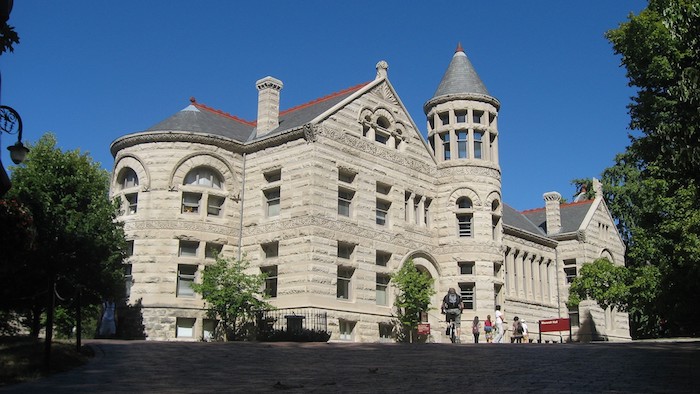 (Times Of Israel)  Complaints about the unmistakable number of Jews taking over Indiana University appeared on a website for the school’s fraternities and sororities:

The August 29 post had appeared on the Greekrank website about fraternities and sororities on campus. It has been deleted, but screenshots have circulated.

“The language used by these anonymous posters is hurtful and offensive,” the statement said. It also said that “Hoosiers are better than this.”

The post said: “OMG so first of all I don’t want to sound racist or anything.. but like wtf why are there so many jews here at IU now wat happened?” the post said. “where being takin over by a bunch of hairy stink rude obnoxious jews… the girls acts so damn exclusive and if ur not jewish u can’t hang out with them or even talk to them.. they give us looks like were below them and not worthy of talking too…this must end or this school is gonna go to ****!”

Some responses on the site agreed, including “UR not wrong but you can’t do anything about it” and “Don’t really have a problem with the guys or girls, just the JAPS,” and “seriously there everywhere.”

The editor of The Tab said on Instagram that “to hear that anti-Semitism is alive and well as a Jew on campus makes me mad. We are better than this. Now show it.”

“They’re very upset and take it very, very seriously, and that’s been very comforting for the students,” Silberberg said of the university officials.

There are about 4,000 Jewish undergraduates on Indiana University’s Bloomington campus, making up 11 percent of the undergraduate student population, according to the Hillel Guide to Colleges.

Four thousand Jews at a lily-white White Mid-West university would be hard not to notice — it’s not as if they blend in.

Maybe they think they look White enough, but they don’t, as these mid-western kids, who probably have never even seen Jews before, can attest.  And since less than 1% of the population in Indiana is Jewish — Jews are clearly over-represented by a factor of 10 at Indiana U.

But this is nothing new — middle class Jews have been infiltrating large State universities since the 1960s, taking advantage of the relatively low tuition costs compared to private schools.  University of Wisconsin-Madison was one of them in the 1960s.  Maryland was another in the 1980s.

It seems Jews target certain colleges as “Jew-friendly” and then all of a sudden thousands start applying, and before you know it, the Dean and all the department heads are jewish within 10 years.  Perhaps this is what contributes to “anti-semitism”.