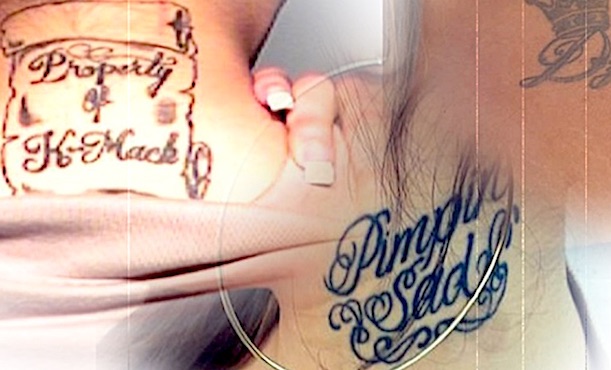 Human trafficking victims, all young White girls, are being branded and sold for sex, some being raped by more than 10 men, one after each other every day, in the Tampa Bay area, ABC’s I-Team found:

“It’s like branding cattle,” said Cpl. Alan Wilkett, who leads Pasco County’s human trafficking task force. “It’s an ownership mark. Branding is when somebody — a pimp or a trafficker — will put his mark or his symbol or his sign on his victims through some sort of tattoo.”

Wilkett said deputies know how to spot the red flags of someone being sold for sex but sometimes rarely act.

“Some of the things we’re seeing are pictures — maybe a lion’s head or it may be the street name of the pimp who’s running a street track,” said Wilkett. “It could be numbers. Using certain numbers, like 16 because ‘P’ is the 16th letter of the alphabet — it means I’m being pimped.”

“A girl at the cash register with an XVI running from behind her ear and down her neck — 16,” said Wilkett. “Looked out the window and there’s her pimp, sitting in the vehicle. So this is happening.”

In some trafficking cases, the tattoo could be a barcode.

“These barcodes are written in such a way by these tattoos and tattoo artists, that if you scan that with your smartphone it’ll tell you she’s $25 or she’s $30,” said Wilkett. “The one that I saw was $30.”

…Natasha Nascimento, the founding executive director of Redefining Refuge, a local non-profit working with victims of child sex trafficking, said she’s seen children branded and a majority of the tattoos are done professionally.

“The youngest child I’ve seen — I believe she was probably somewhere around 11-years-old — she had dollar signs… tattooed onto both of her eyelids,” said Nascimento…

Redefining Refuge has worked with the Tampa Bay area tattoo artist community to help cover up tattoos for child sex trafficking survivors as part of the recovery and healing process.

“Think about that. Children in a first world country in the United States of America being branded like cattle,” said Nascimento. “That’s what’s happening and it’s happening today.”

Ironically, this is a Mexi-Merican woman who is appalled that she is witnessing Third World savagery in formerly First World America.  She came to America to escape this brutality, but unwittingly brought it with her.

Entire swaths of the Tampa Bay area are Black and Latino ghettos, and the police are fully aware that any White girl seen in those areas must be exploited in one way or another, but do nothing.

And surely Blacks and Mestizos trafficking White teenagers is surely a sign that our White society has become absolutely rotten to the core, and this disease will continue to spread until it’s impossible to ignore the problem any more.

This is future promised by the mantra “Diversity is our strength.”