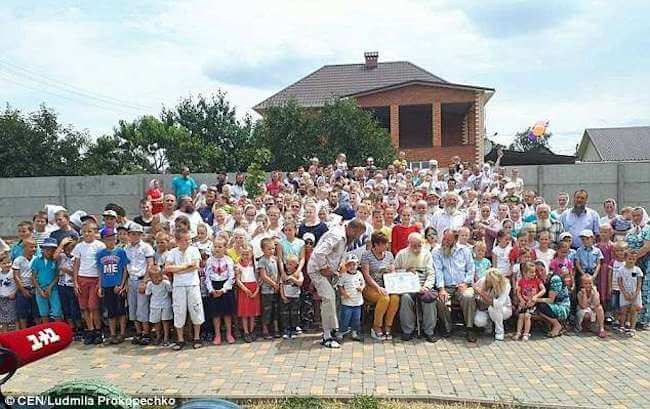 A Ukrainian man is applying for the Guinness World Record for having the largest family on earth:

Pavel Semenyuk, 87, always dreamed of a large family and was thrilled when his wife gave birth to 13 children.

Many births and marriages later, the Semenyuk clan stands at a whopping 346 living descendants, with the youngest member just two weeks old.

The Semenyuk family lives in the village of Dobroslav in southern Ukrainian Odessa Oblast region.

It’s all one big happy family, the retired construction worker said, mentioning the only difficulty is remembering all the names of his descendants.

Obviously, this man and his wife didn’t listen to the fear mongers who claim that children are just too expensive to have these days. And it’s doubtful that any of his descendants are welfare dependents or burdens on society.

His family is living proof that European nations do not need to import Third World non-Whites to compensate for the supposed low birth rate.

Hopefully, this story will inspire other White families to be so fruitful and multiply.

Have Hungary’s Pro-Family Policies Resulted in a Baby Boom?