Why Are Police In London Investigating Claims That Jews Were Behind The 9/11 Attacks In U.S.? 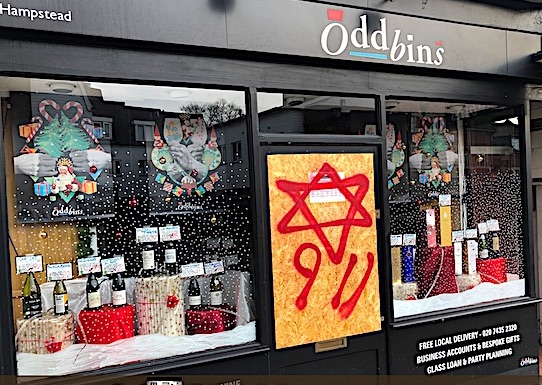 As London’s Jewish community celebrated the holiday of Hanukkah, police are investigating reports that a synagogue and some shops were tagged with graffiti that alleges jewish involvement in the 9-11 attacks:

London’s Metropolitan Police received reports of the graffiti on Saturday, and are conducting inquiries “to find who is responsible,” officers said on Sunday.

The graffiti – found at a number of locations in the Hampstead and Belsize Park area – depicts a Star of David and the numbers “9.11,” a reference to the conspiracy theory that a Jewish cabal orchestrated the September 11 2001 terrorist attacks in New York. One of the crude messages was spray-painted onto South Hampstead Synagogue.

“We must move heaven and earth to eradicate this racist hatred, which was unimaginable just a few years back,” Hampstead Councillor Oliver Cooper tweeted on Sunday.

An August report by a Jewish advocacy group found that 892 anti-Semitic incidents were recorded in the first six months of 2019, including 85 assaults. Such incidents have been rising since 2013, and range from harassment on social media to attacks on the street.

The rise in anti-Semitism has been blamed on the far right, on Muslim immigrants, and on Jeremy Corbyn’s Labour Party. The politician was pressured into apologizing after Chief Rabbi Ephraim Mirvis claimed that “a new poison – sanctioned from the very top” had taken root in the party.

…Some pundits maintain Corbyn himself was subjected to anti-Semitism allegations because of his opposition to Israel’s policies and unconditional support for Palestine.

When the jewish-dominated media originally promoted the ‘conspiracy theory’ that a group of 19 rag tag Muslims, without any credible supporting evidence, planned and executed the 9-11 attacks, no one was smeared as an “islamophobe”, but when Jews are accused of the same crime, with a mountain of evidence to support the allegation, it’s considered by the police a “hate crime”.

By now, we’ve come to understand that the truth is no defense when you are accused of antisemitism.  If, say, you point out that the so-called Diary of Anne Frank is a complete fraud perpetrated by her con-man father, Otto Frank, you are obviously an antisemite, even though its fraudulence has been proven in a court of law.

And just to be clear: it’s not skinhead ‘White supremacists’ who are claiming that Jews masterminded 9-11; no, it’s credible, high-profile Jews who are making these allegations.

Never forget that it was “Dancing Israelis” who were the only people arrested on 9-11 in connection with the attacks: