Why Didn’t Jews Object To Bill Gates Calling COVID Vaccine ‘The Final Solution’ To The ‘Pandemic’? 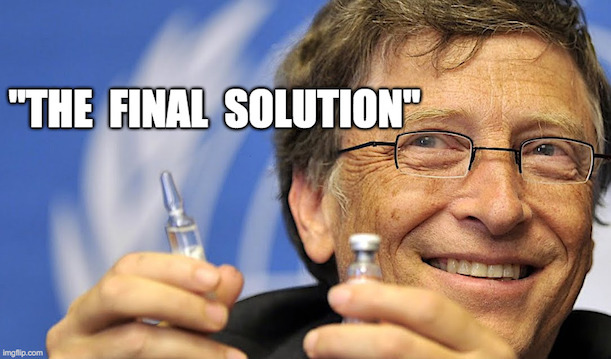 Back in April of 2020, still in the early stages of the global ‘plandemic’, late night court jester Steven Colbert interviewed Bill Gates about what the plan of action would be to handle this ‘crisis’, and Bill Gates used language that evoked the so-called “Holocaust”, which oddly did not provoke the typical and predictable manufactured outrage from Jewish groups like the ADL and the World Jewish Congress:

Gates:  In the near term, it’s the scaling up of testing and prioritizing who gets testing, and get them quick results.  In the mid-term, it’s these treatments that can cut the death rate down, potentially dramatically.  Then the final solution, which is a year to two years off, is a vaccine.  So we’ve gotta go full speed ahead on all three fronts.

Colbert:  Just to head off the conspiracy theorists, we shouldn’t call the vaccine “the final solution”.  Maybe just “the best solution”.

Sherlock Holmes once solved a criminal investigation using the concept of “the dog that didn’t bark.”

When the guard dog doesn’t bark, then those committing the crime are very familiar to the victim.

For example, last year when a newspaper in Norway used the term “the Jewish Question” in the context of the Arab-Israeli conflict, Jewish organizations went ballistic and forced a public apology and retraction.

Clearly, Bill Gates used the term “final solution” deliberately as a nod to his kosher cronies in crime — and the fact that Colbert immediately brought up “conspiracy theorists” shows just how scripted this exchange actually was, including the fake joviality.

Of course, “the final solution” is not a phrase coined by the “Nazis”, but rather by the founder of Zionist Movement, Theodor Herzl, who said that the Jews moving to Palestine and establishing a Jewish ethno-State would be the “final solution to the Jewish question.”

And Karl Marx once described his “final solution” in these terms,”Communism is the riddle of history solved, and it knows itself to be this solution.”

So there you have it — the “final solution” to the Jewish Question is the establishment of a worldwide communist system ruled over from the rebuilt Third Temple in Jerusalem — and this plandemic is being used to take a quantum leap forward toward that goal.

Marx knew this wasn’t just an economic war but also a racial one as well: “The classes and the races, too weak to master the new conditions of life, must give way….they must perish in the revolutionary holocaust.”

And speaking of Sherlock Holmes, we would be remiss not to point out another astute observation he once made: “It must tend to some end, or else our universe is ruled by chance, which is unthinkable.”