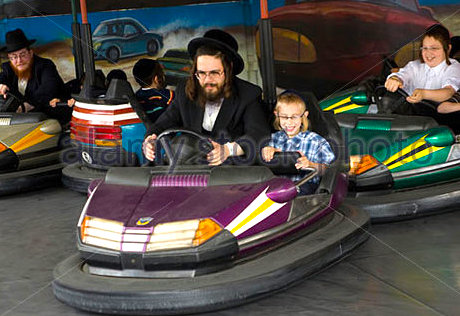 An Orthodox Jew who made a dangerous illegal lane change while trying to get through the Queens Midtown Tunnel in New York City was called “stupid” by an irritated traffic cop, prompting the jewish press to report the incident world-wide:

In a time when anti-Semitism is rearing its ugly head both in the city and around the county, it’s painful when it comes from an NYPD Traffic Agent.

A motorist contacted Yeshiva World News, saying he was on 57th Street and Park Avenue at 6:00PM Tuesday evening, trying to get into the Queens Midtown Tunnel. Due to traffic, the driver was unable to get out of the lane he was in, and attempted to make a turn. At that point, the Agent walked over to the vehicle, took a look at the Orthodox Jewish driver and his passenger, and told them “you can’t make a right turn, you stupid Jew”.

Stunned, the driver parked the car, and the passenger walked over to him with his camera recording and politely asked for his badge number. The Agent refused to give his badge number and instead said: “I didn’t mean what I said, and I apologized to the other gentleman”.

The victim of this anti-Semitic abuse persisted and asked for the badge number again. The Agent again said that he did not mean what he said, refused to give his badge number and walked away.

If you’ve ever lived in New York, you probably know that Orthodox Jews are notoriously bad drivers, even worse than Asian women, and unfortunately NYPD traffic cops have to deal with them on a daily basis, which makes it understandable why they might lose their cool every now and then.  After all, these highly “religious” Jews honestly believe what their “holy” Talmud says, that they don’t have to obey the laws of the “goyim” nations in which they live, and it is inconceivable to many of them why they can’t drive their cars anywhere they want, including on the sidewalks if they feel like it.

In the not-too-distant past, New York City was a far more accepting place of racial and ethnic differences.  Different people routinely called each other names and epithets, such as “Jew” or “Wop” or “Kraut” or “Pollack”, and nobody even batted an eye, but after 70 years of non-stop Holocaust and Nazi fear porn in the jewish-controlled media, it’s no wonder that when a Jew is called a Jew by even a police officer, it conjures up visions of gas chambers and bars of soap.  If Jews don’t want to be singled out for the gas chambers, perhaps they should do a better job in obeying simple traffic laws.