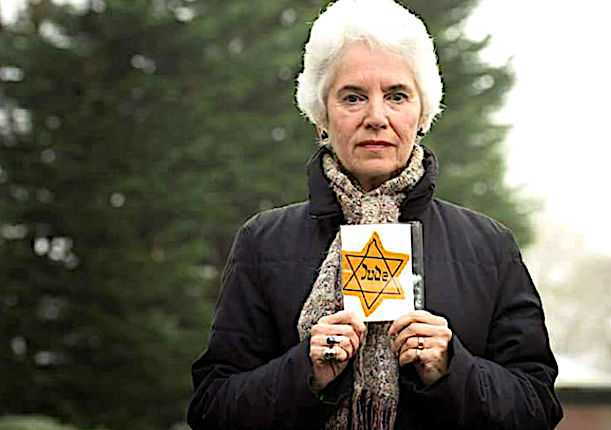 When Eva Clarke, a relatively young-looking woman showed up to have her picture taken with Holocaust survivors in Great Britain for an upcoming photo-book, the incredulous photographer, Matt Writtle, felt compelled to ask her how it was possible that such a young person survived the Holocaust — and the answer he got was equally unbelievable:

…One survivor’s story that has stayed with Writtle is that of Eva Clarke. “I remember she walked in and I remarked that she didn’t look old enough to be a survivor,” he says. “She looked at me and said: ‘It’s funny you should say that. I will tell you my story in a moment.’

“I sat and listened to her story. Her mother weighed just six stone [84 lbs] and was on the back of a cart going up to the gas chamber, when the Allies starting bombing. She then went into labor and had to give birth on the back of this cart, in silence, on her own, while other prisoners attempted to cover her. If she had been found out, the guards would have shot her and the baby.

“There are so many horrendous stories, but that one for me really stood out,” Writtle says.

One of the major holes in Eva Clarke’s story is that she was interned with her mother at Mauthausen — and even mainstream Holocaust historians have been forced to concede that there were no “gas chambers” at that labor camp — or any on German/Austrian soil.

In an “officially sanctioned” history of Mauthausen, Hans Marsalek, claimed,

… Below the bunker was the first crematorium. Its fire burned day and night, and the glare of the flame shooting out of the chimney could be seen far away in the Danube valley…

Cremation takes place in special ovens which are cokefired, electrically-fired (cremation of a body requires about 45 Kw of energy), or gas-fired… [and is] entirely free of smoke [Staub] or odor….[The cremation] takes place in dry air heated to 900-1,000 degrees [Celsius], that is without the flame coming into contact with the dead [body]. The oven is heated beforehand for two to three hours, and the cremation process itself requires between an hour and a quarter and an hour and a half.

In another book, Marsalek claims that the first gassings at Mauthausen used carbon monoxide gas created from diesel sources which, of course, is not poisonous enough to kill people  — so-called “eyewitnesses” at Treblinka made the same false — scientifically impossible — claim.

In another account of Eva’s experience, she completely failed to mention that the cart she was allegedly born in was headed to the “gas chambers” at all — in this other account, the cart was just being hauled up to the “front gates” of the camp.

And just like many other “survivor” testimonies, Eva claimed that the reason she wasn’t “gassed” as a newborn was that the Nazis just so happened to run out of Zyklon-B just the day before because of “Allied bombing” — another Shoah miracle!

And another strange part of her ever-changing story is that she claims she had an infant sibling — “George” — who died in Theresienstadt concentration camp where her parents were first held — yet somehow her mother managed to get pregnant again right before her randy husband was “shot” — after which her ever-pregnant mother was then moved to Auschwitz — and then on to Mauthausen to be “gassed” — miracles of miracles!

But like all elderly Holocaust confabulators, Eva appears to have a compulsion to constantly embellish her story over the years — apparently going unchallenged only encourages them to tell even more improbable tales of ‘survival’.

It’s surprising that no one has bothered to tell Eva that many of the concentration camps — including Auschwitz where her mother was allegedly sent pregnant with her  — had maternity wards and nurseries that cared for newborns and their mothers — but why bother with nurseries if you are going to execute pregnant Jews, as Eva claims?

As Jews like Eva are wont to claim, “It’s complicated.”