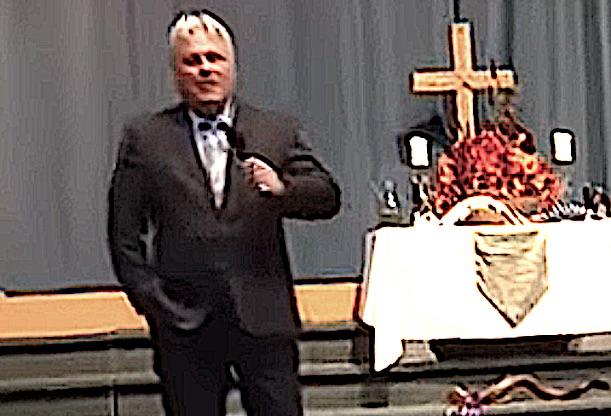 Dr. Igor Shepherd, a medical doctor/manager for Wyoming’s State Public Health Department/Preparedness Unit and a member of the COVID response team, has been suspended for warning the public that the coming COVID vaccines are “biological weapons of mass destruction”:

I was able to have a conversation with Dr. Shepherd after he did a talk for “Keep Colorado Free and Open” [recently].

Dr. Shepherd wrote to me, and I was able to get a copy of his important talk.  He has taken great risk to do this talk about the horrors of this new ‘Covid-19’ vaccine, so I recommend that all watch and listen.

It is a fairly long talk and questions are answered at the end, but it is worth every minute of your time.

He calls them “Biological Weapons of Mass Destruction.”

Dr. Shepherd was born and raised in the Soviet Union, and became a Military Doctor in St. Petersburg, Russia, and studied under the Strategic Rocket Force.

He is an expert today on bio-weapons, Chemical, Biological, Radiological, Nuclear, and high yield Explosives,(CBRNE) and Pandemic preparedness.

His view is that these vaccines are very similar technology to the bio-weapon RND used to develop viral weapons. He fully understands that the plan of depopulation and mandatory vaccinations will be at our doorstep very soon, and is shocked that the American people are so passive concerning this enemy takeover.

He believes that this fake pandemic is the means by which a communist global government will be ushered into existence; one that cannot be voted out.

I agree with this thinking, as this technocratic takeover and economic destruction will be communistic in nature.

I just received some disturbing information from Dr. Igor Shepherd. It is a tragic shame, but certainly was expected.

Dr. Shepherd just received a call from the Wyoming State Deputy Director of Public Health concerning the video from his latest talk in Colorado that was featured on this website.

He has now been put on administrative leave, and a third party is doing an investigation on this matter. He believes that the Wyoming governor must have viewed his speech, thus starting the process to remove him from his position for telling the truth.

He told me that he could no longer remain silent in the face of this treasonous takeover of this nation. He is at peace with this, and regardless what happens, will continue his life and will tell the truth about this virus fraud.

Since last March when this fake pandemic was first rolled out, we have been telling our readers that this event will be used to usher in the complete bolshevism of all western Christian nations — and this former Soviet doctor has now confirmed it.

They have to bring this about quickly — it’s been a slow boil for the last 100 years — but now they can see the end in sight, and they are going to begin accelerating world events so that people cannot organize against it.

That’s what “social distancing” is all about — they want to make mass protests against this bolshevik revolution illegal — and “contact tracing” isn’t about the virus — it’s about keeping track of the dissidents, to make sure they don’t “infect” the brainwashed, apathetic masses who are addicted to their televisions, pornography, and Facebook.

For the last 60 years or more — starting with Senator Joseph McCarthy — the Jewish controlled media and education system have relentless mocked and scoffed at anyone who warned of the communist takeover of America — after all, Satan’s greatest trick was convincing the world that he didn’t exist.

Vaccines normally take at least ten years to develop — and they still don’t work — but we are supposed to believe that these COVID vaccines can be effective after only a few months of testing — they tried this in 1976 with the fake Swine Flu “pandemic” with absolutely catastrophic results, with thousands of people disabled and killed by the bogus vaccines.

Had they gotten their wish and vaccinated “every man, woman, and child” in the U.S. for Swine Flu, we would have seen the worst medical catastrophe the world had ever seen — far worse than the 1918 “Spanish flu” death toll — and more like the Black Death of the Middle Ages.

But they are working of that same old script — getting former presidents to get the “vaccine” (placebo) on television — just as Gerald Ford did in 1976.

But COVID is going to be much worse than 1976 — because they now have the infrastructure to vaccinate hundreds of millions very rapidly — and with improved computers, can keep track of it all.

Why is the U.S. military — not the CDC — printing up COVID “immunity” record cards for all U.S. residents to carry with them in their wallets and purses?

And the dragon was wroth with the woman, and went to make war with the remnant of her seed, which keep the commandments of God, and have the testimony of Jesus Christ.

We strongly suggest that everyone who can download and copy this speech to their hard drives — no doubt it will disappear from YouTube: