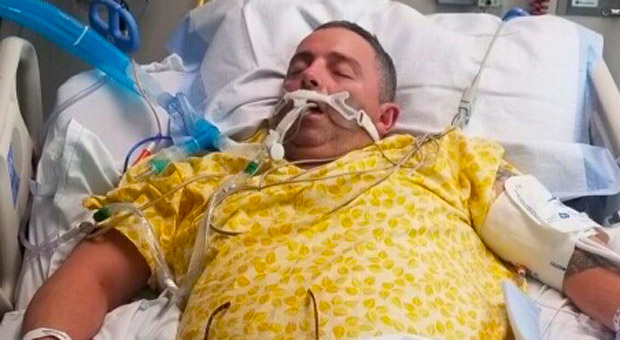 A Las Vegas man, Shane Morgan, is currently on life support after developing paralysis which his family believes was caused by the flu shot he recently received:

Shane Morgan is currently on life-support in the Intensive Care Unit after contracting a rare disorder that has left him unable to move or speak, in need of a ventilator to breathe, and having to be fed through a tube.

Shane has developed Guillain-Barré syndrome (GBS), which Monique Morgan says her husband Shane contracted “as a result” of the influenza vaccine which he received on Nov. 2.

Just over a week later on November 14, Morgan says her husband was asking for help.

“He’s like I can’t feel my legs… I need you to take me to the emergency room,” said Morgan.

Shane has been hospitalized since then, and a medical professional says this could be a rare disorder that’s known to be linked to the flu vaccine.

…”In all my years of practice, I had only seen one case of this,” Dr. Daliah Wachs told KMTV.

Wachs, who is not treating Shane, spoke about how the flu shot triggers GBS, saying that the vaccine doesn’t carry it, but causes your body to develop it. “You can’t get that from a flu shot,” said Dr. Wachs.

“A flu shot will not inject anything into you, Guillain-Barré is your body’s response to a flu shot or a pathogen.” Dr. Wachs says if you have a history of GBS, talk to your doctor.

But medical professionals still urge the general public to get vaccinated.

It’s hard not to notice that this article solicits the “expert” opinion of a jewish doctor, Dr. Daliah Wachs, to reassure us all that despite the fact that the flu shot can paralyze or even kill us, we should continue to get them anyway.  And Dr. Wachs is a Talmudic hairsplitter, claiming that the flu shot doesn’t literally inject GBS directly into its victims.  No, but the contents of the flu shot and many other common vaccines, like the tetanus vaccine, can and will cause thousands of people to contract Guillain-Barre every year, according to the CDC’s own statistics on vaccine injuries.

According to this “wise” doctor’s logic, it is better to having paralysis and be on life support than it is risking getting the common seasonal flu, which is almost never deadly except in cases where someone is extremely immune compromised.  Many recent studies have shown that these flu shots are less than 5% effective, which is within the margin of error — meaning that they probably don’t work at all, except if you’re trying to cripple and kill people while making billions doing it.

Here is a powerful video from a retired hospital worker who warns the public about flu vaccines (originally on Youtube here):