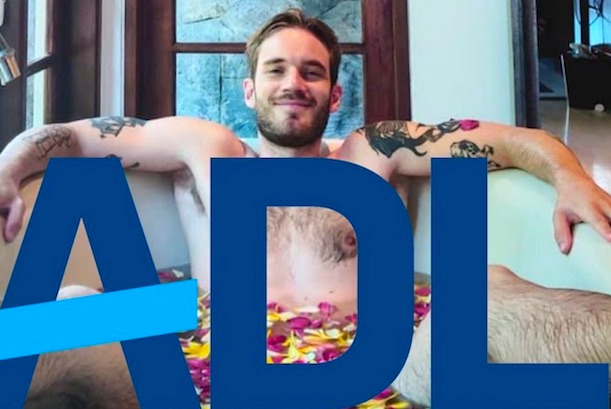 After repeated threats to shut him down over alleged ‘hate’ content that the ADL, a jewish supremacy watchdog group and alleged foreign agent of the State of Israel, YouTube mega-star Pewdie-Pie has agreed to fork over $50,000 as an alleged “donation” to help fight ‘hate speech’ online:

PewDiePie, whose real name is Felix Kjellberg, recently celebrated reaching the 100 million subscriber mark, making him the first solo YouTuber to do so – the Indian music channel, T-Series, had already reached that point after their widely-publicised “subscriber war.”

In his video celebrating the milestone, and unboxing the custom award that YouTube sent him, Kjellberg said that “as an additional celebration, I’m donating $50,000 to the Anti-Defamation League, which is an organisation that fights bigotry and prejudice in all its forms.”

This is despite the fact that the ADL have had PewDiePie on their hitlist for years. In 2017, Jonathan Greenblat, CEO of the ADL, had said some of his videos counted as “hate speech,” and that they were “pleased” when Disney severed ties with him:

“PewDiePie’s effort to defend it as an attempt to be funny falls flat. PewDiePie is entitled to his views, but neither Disney nor any other company has any obligation to support his wide dissemination of hate speech.”

The ADL were also responsible for the recent removal of many conservative YouTube channels. On August 15th, they released a hitlist of channels they wanted removed, including James Allsup, Faith Goldy, and The Red Elephants. Goldy’s channel remains online, but the other two were since removed. Speaking to National File, Allsup named the ADL as a key reason why his channel was taken down by YouTube:

“I have been targeted by the ADL, which listed me on a hit list of channels they wanted banned. Their operatives have been publicly calling for me to be banned. Today they got their wish… I was banned from Instagram and Facebook, and now YouTube, because the left isn’t interested in the debate… They aren’t interested in truth. They want to paint me, and by extension you, with an ‘evil’ brush- they want you to be a caricature they can easily demonize… When you’re a normal person with nonthreatening ideas and a happy family, that’s very inconvenient for their character assassination.”

Goldy told National File that the ADL were doing this to stop the re-election of President Trump. “They’re playing right-wing whack-a-mole with our socials,” she explained.

Some have speculated that PewDiePie is trying to pay off the ADL (the internet mafia) in the hopes that this will appease them, and stop them from focusing on his channel again. This is, of course, a fools errand. If he ever says something that is interpreted as remotely charitable to the right, or just the cause of free speech again, he will once again be “cancelled,” and no amount of money will stop that from happening.

PewdiePie has become a multi-millionaire on the jewish-controlled YouTube platform, and so he is beholden to the Jews to keep his money and fame intact, and the Jews know this.  They own him, just like they own every star in Hollywood.

But PewdiePie is incredibly naive to think that giving these gangsters 50 grand is going to keep them off his back.  Because of his fame and influence, the ADL will watch him like a hawk and analyze every syllable that comes out of his mouth, waiting for ‘antisemitic’ dog whistles of any kind.

Paying this ‘hush money’ shows the Jews that PewdiePie is weak and afraid, and this “donation” will become a regular thing, as it always does when you “do business” with the mafia.

Of course, it’s an antisemitic ‘canard’ to claim that Jews have the power to shut down anyone’s constitutionally-guaranteed freedom of speech, and to prove that they don’t have that power, the Jews will silence anyone, like PewdiePie, who dares make that claim.

Update: Is PewDiePie censoring his YouTube comments for the ADL?

People are now pointing out that PewDiePie may be actively censoring his comments on behalf of the ADL. Regardless, something fishy is going on: