The Anubis Caves: Evidence Of Mithraism And Celtic Religion In The Oklahoma Panhandle 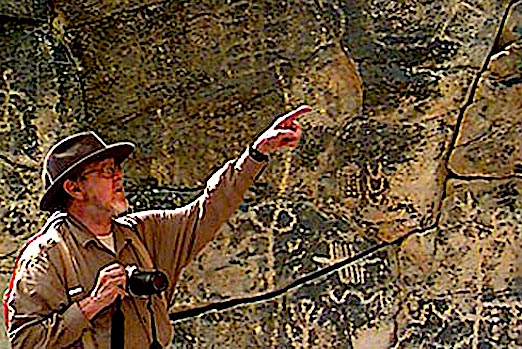 Literally thousands of rock inscriptions and ancient artifacts have been discovered all across the North American continent that conclusively prove the presence of White people here as least as early as 1,000 B.C., during the reign of King David, and yet the mainstream academics are forbidden to acknowledge this archeological elephant in the room or risk losing their jobs and reputations.

The reason for this is simple: if White people traveled to North America prior to a time when White people were even allegedly in Europe, then where did they come from?  Clearly, they came from the Near East and North Africa, such as Carthage (Lybia), Egypt, and the Levant, including Phoenicia (the coast of Canaan).  That all these areas were inhabited by White people at one time is a can of worms that must never be opened.  Today’s mass deception relies on it being kept hidden, forbidden, and forgotten.

The following article by Carl Lehrburger first appeared in the periodical Ancient American (Issue #68).  Other related articles by Lehrburger on Old World rock art in North America as it relates to archaeoastronomy can be found here.

The Anubis Cave site, located in the Oklahoma panhandle, is one of the most significant examples of Old World contact in the New World before Columbus. The epigraphy and mythology inscribed in this group of caves are interwoven into an elaborate heliolithic apparatus precisely calibrated for equinoxes. Phrases in Celtic etched in Ogam and Libyan scripts have been interpreted to refer to celebrations at equinox and mention Bel and Brian, Celtic names for the sun god. Remarkably, the Anubis Caves are among the best surviving records of the cult of Mithras, an Old World religion that spanned the Persian and Roman empires.

Gloria Farley was shown the site in 1978 by a local rancher. Shen then identified the dog-like figure in one of the caves as the Egyptian jackal-god Anubis, hence the name Anubis Cave.

Barry Fell provided translations to some of the inscriptions. Based on this translation, the presence of sun symbols, and the general orientation of the caves, it was predicted that the caves contained an equinox alignment involving light and shadow interplay. Another study reported that such alignments did in fact exist at the Anubis site. This work lead to a more thorough treatment of the archaeoastronomy, cosmology and mythology of the site in Ancient American Inscriptions (McGlone et al. 1993) the primary source of information used in preparing this article…

Judged by their appearance compared to 19th and 20th century graffiti on the panel, the Anubis Caves inscriptions are quite old. Cation Ratio dating, also known as indirect carbon-14 dating, was completed by Professor Ron Dorn from Arizona State University. Using his technique for dating rock varnish or patina, he concluded that the inscriptions are 2,000 years before the present with a +/- of 300 years…

Ogam is a writing system using parallel lines in groups to represent letters. It was used in the first millennium A.D. in the British Isles. While Ogam can be used to write any language, most Ogam messages use a Celtic language. There are many examples of Ogam in Ireland and England, but it is also found in Africa and the Iberian Peninsula.

The existence of Ogam in America has been a controversial topic among researchers and archaeologists. While most professional archaeologists have dismissed Ogam in the New World, a dozen sites throughout Southeastern Colorado present compelling evidence that Ogam found its way to the New World long before Columbus.

There are Oram-Like inscriptions in five of the Anubis Caves. The first to receive attention was the “Six Months Ogam” in Cave 3. It was originally translated by Fell as “The Sun is Six Months in the North; in the South For the Other Months.” Fell’s early translation led to the original suggestion by Jon Polansky that the site was associated with the equinox. After much discussion among other researchers, the translation was modified to “The Sun six months north, sinks south for space months equal number.”

Another Gam-Like inscription from Cave 4 was interpreted by Fell to say in Gaelic, “The Sun belongs to Bel. This cavern on the day of the equinox is consecrated for chanting or prayers to Bel.” While the entire inscription has the appearance of Ogam, this interpretation has not been corroborated.

Libyan writing has also been discovered at the Anubis Caves. Below and to the right of the Sun God’s feet are Libyan letters which Fell proposed to read as “Enact at sunset the rites of Bel, assembling at that hour in worship.” Other potential inscriptions in Ogam can be observed at Anubis Cave, but they have yet to be confirmed as Ogam or interpreted with great reliability.

The rest of this article can be read here.

To see a trailer for a documentary about these inscriptions, click here.