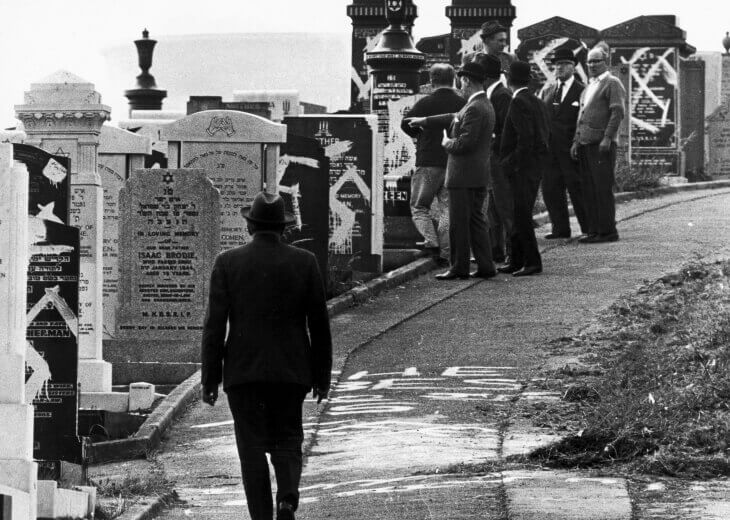 “In cinema queues and on street corners, one topic dominated the conversation: the murder of two British army sergeants by Irgun paramilitaries in Mandate Palestine.

The Irgun was one of several Zionist groups fighting a guerrilla war to force British troops out of the territory and establish the state of Israel. It had kidnapped the two sergeants in retaliation for death sentences passed on three of its own fighters. The three men were executed by British forces on 29 July, and two days later the bodies of the soldiers were discovered amid the trees of a eucalyptus grove near Netanya. They had been hanged and the ground beneath them booby-trapped with a landmine.”

“By the end of the bank holiday weekend, anti-Jewish riots had also taken place in Glasgow and Liverpool. There were minor disturbances, too, in Bristol, Hull, London and Warrington, as well as scores of attacks on Jewish property across the country. A solicitor in Liverpool and a Glasgow shopkeeper were beaten up. Nobody was killed, but this was the most widespread anti-Jewish violence the UK had ever seen. In Salford, the day after a crowd of several thousand had thrown stones at shop windows, signs appeared that read: “Hold your fire. These premises are British.”

The author of this article, Tony Kushner —  of course interprets the events from a Jewish perspective — using the tired Jewish canard that the riots were the result of the post-WWII economic depression — frustrated unemployed workers “jealously” going after the prosperous Jewish business owners.

This is completely false.

The Jewish terrorist group — the Irgun — which carried out these assassinations — already had committed a number of bloody attacks against British officers and diplomats – trying to force them out of Palestine so that the Jews could take complete control – and the British people had had enough of these brutal gangsters who would stop at nothing to get what they wanted.

Kushner also blithely writes the whole episode off as a “brief moment when the messy end to a colonial misadventure was played out on British streets.”

Imagine someone calling the murder of Israeli Jews at the hands of Palestinian freedom fighters “a colonial misadventure” — that would be unforgivable and heads would roll.

Kushner also pretends to not understand why this violent event blew over so quickly — and was all but forgotten by the British people.

This grim story of violent antisemitism was intentionally send down the memory hole because it shows the direct connection — cause and effect — between Jewish behavior and an “antisemitic” backlash — a violation of the official narrative of Jews as the eternal victims of “irrational” hate.