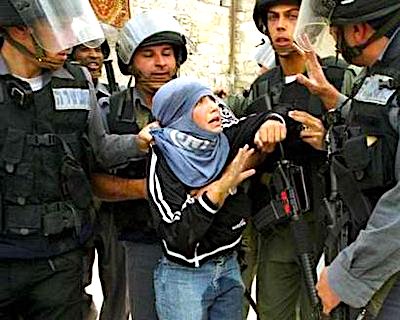 Recently declassified documents from the CIA written at the time of the original partitioning of Palestine reveal that the CIA believed that the Israelis had no intention of honoring the original borders they agree to and that eventually they intended to literally wipe the Palestinians off the map and take all the land for themselves:

In The Arab Lobby, I documented the efforts of Arabists in the State Department to prevent the partition of Palestine primarily because of concern that US support for a Jewish state would threaten access to oil and allow the Soviet Union to gain influence in the region. I also referred to the presence of Arabists in the intelligence community but did not have documents to cite their views — until now.

In a report dated October 20, 1947, the CIA laid out America’s interests and concerns for a place whose “geographic position gives it a strategic significance out of all proportion to its size and wealth.” The report stated, “To counter Soviet infiltration, political, economic, and social stability must be maintained in the area” and access to Middle East oil “depends on friendly US relations with the Arab people as well as with their governments.” The CIA believed the Arabs needed US aid to raise their standard of living but would not accept it if the US supported a Jewish state. Hence, it concluded, “The Palestine issue is capable of changing the development of the Arab world from one of evolution in cooperation with the West to one of revolution with the support of the USSR.”

…The report also said Soviet agents were smuggled into Palestine as Jewish displaced persons and that the Soviet Union was “actively but secretly assisting the Jews.” The Joint Chiefs of Staff expressed the view of Arabists at the time when they reported that the Zionist leadership “stems from the Soviet Union … and ideologically is much closer to the Soviet Union than the United States.”

…Making the Zionists sound more threatening, the CIA predicted they would not be satisfied with partition: “Even the more conservative Zionists will hope to obtain the whole of the Nejeb, Western Galilee, the city of Jerusalem, and eventually all of Palestine. The extremists demand not only all of Palestine but Transjordan as well.”

If the CIA foresaw in 1947 that the Jews would never agree to a “Two State Solution,” why has literally every U.S. President since that time promoted this unacceptable idea as the basis for “peace” in the Middle East?

And what happened to the U.S. Presidents who tried to force the Israelis to the bargaining table to accept this Two State Solution?  Richard Nixon was forced out of office.  Jimmy Carter lost re-election.  George Bush Sr. lost re-election.  Bill Clinton was impeached.

Compared to the original partition that the Jews agreed to, there is almost no Palestinian territory left, and what is left is literally shrinking every day.  When the Israeli Prime Minister makes public pronouncements that he intends to annex The West Bank, no one in the U.S. government dares question him.

The “Final Solution” to the Palestinian Question is a complete ethnic cleansing of all Palestinian occupied land, and once everyone comes to accept that reality, the quicker the Jews can move on to more important issues, like blowing up the Al-Aqsa Mosque, building their Third Temple, and ruling the world.

The documentary, The Occupation Of The American Mind, narrated by Roger Waters of Pink Floyd, exposes the stranglehold that Zionists have on America, as confirmed by New York Times award-winning jewish journalist, Thomas Friedman: