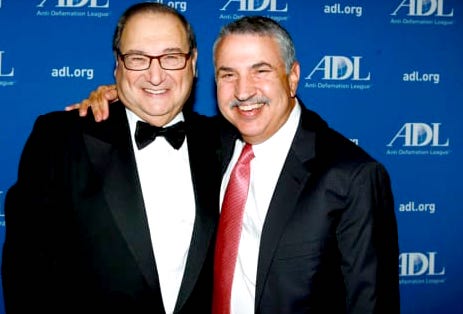 Next month, the jewish magazine Moment will hold its “DC Gala & Awards Dinner” honoring four ‘distinguished’ journalists, including Thomas Friedman of The New York Times, who has candidly admitted that the pro-Israel AIPAC controls Congress and The White House:

Friedman did later become a personal friend and tennis partner of Secretary of State James Baker, the most anti-Israel secretary of state in American history. According to Baker’s autobiography, Friedman gave him advice on how to more effectively pressure Israel.

Around 1982, Friedman went off to Lebanon as a correspondent for The New York Times, posing as an objective reporter. Later, in his book ‘From Beirut to Jerusalem’, Friedman boasted that he “buried” Israel’s top military brass by blaming them for Lebanon Christian killings of Palestinian Muslims. So much for journalistic objectivity!

In the book, Friedman falsely portrayed himself as a lover of Israel who only became its critic when he witnessed Israeli actions in Lebanon. I guess if he admitted that he had been hostile to Israel since his Brandeis University days, it would have blown his cover. He needed to pretend that it was Israel which made him hate Israel….

In several of his more notorious columns over the years, Friedman has portrayed Jews as sinister manipulators who try to control world leaders. In his New York Times column of February 5, 2004, for example, Friedman wrote that Israeli Prime Minister Ariel Sharon has “had George Bush under house arrest in the Oval Office … surrounded by Jewish and Christian pro-Israel lobbyists, by a vice president, Dick Cheney, who’s ready to do whatever Mr. Sharon dictates …”

In his December 13, 2011 column, Friedman asserted that the standing ovations Prime Minister Benjamin Netanyahu received when he addressed Congress were “bought and paid for by the Israel lobby.”

And in his November 19, 2013 column, Friedman wrote: “[N]ever have I seen more lawmakers — Democrats and Republicans — more willing to take Israel’s side against their own president’s.” He claimed there is “a growing tendency by many American lawmakers to do whatever the Israel lobby asks them to do in order to garner Jewish votes and campaign donations.”

Friedman is part of the controlled opposition like Seymour Hersh, and should in no way be considered a real opponent to jewish power in America or globally, despite his criticisms of the Trump White House.

But, of course, when Friedman states these obvious facts of inordinate jewish power, no one bats an eye except perhaps the ultra-Zionist bigots, but if any non-Jew repeats these facts, Abe Foxman, his tag-team friend from the ADL, will  smear you as an antisemite who wants to “wipe Israel off the map” and “gas six million Jews” and the like.

But that’s the wonderful thing about Jewish Privilege: you can criticize your fellow Jews, and even accuse them of controlling the most powerful country in the world without being smeared as an antisemite and/or summarily fired from your job and ostracized from your social circles.  No, instead you are given ‘prestigious’ award from your fellow, like-minded Jews. 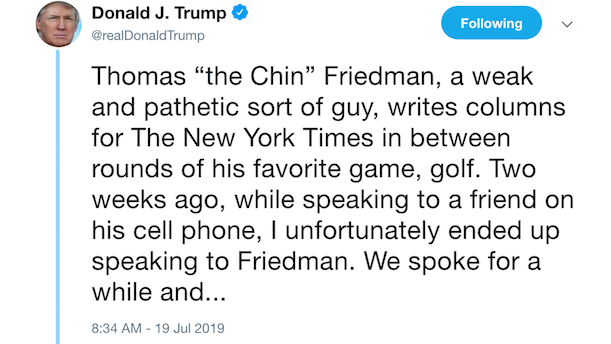