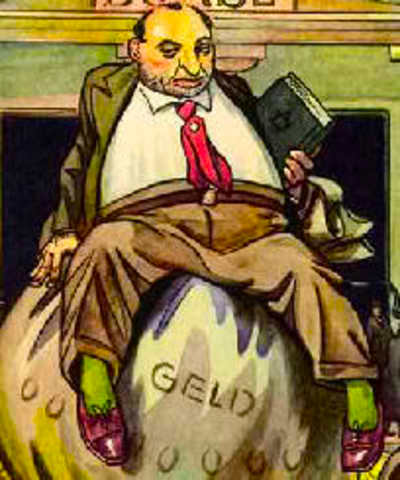 The Jewish Museum in London has announced a major new exhibition on the role of money in Jewish life and its “often vexed place in relations between Jews and non-Jews”:

The collection – named Jews, Money, Myth – will examine the “myths and reality” of Jews’ role as medieval money-lender, and the place of Jews, real and imagined, in modern capitalism.

Abigail Morris, the director of the Jewish Museum, said: “Myths and stereotypes have origins, and this exhibition draws on objects from over 2,000 years to go to the roots of Jewish practices around money.

“At the same time, it shows how certain dangerous, even deadly, interpretations emerged and still proliferate around the world.

“As a museum dedicated to the history and culture of Jews in Britain, we are more aware than ever of the importance of providing a safe space to consider and challenge such stereotypes, if we are to combat hatred and challenge ignorance.”

The exhibition – which will run between March 19 and July 7 at the museum in Camden, North London – was curated in collaboration with the Pears Institute for the Study of Antisemitism.

It will feature loans from Europe, North America and Israel.

The centrepiece exhibit will be Rembrandt’s 1629 work Judas Returning the Thirty Pieces of Silver, loaned from Mulgrave Castle in Lythe, Yorkshire.

Of the painting, the Jewish Museum said: “The story of Judas Iscariot, betraying Jesus for 30 pieces of silver, widely embraced in Christian iconography as a symbol of self-seeking greed, and which has propelled anti-Jewish stereotypes to this day, forms an important feature of the exhibition.”

Other artefacts on display will include a 19th-century board game, titled The New and Fashionable Game of the Jew, at the centre of which sits a “stereotypical Jewish banker… hoarding money, an example of how widespread associations of Jews and money had become in polite society”.

And on loan from the Wiener Library is Der Giftpilz (the Poisonous Mushroom), a Nazi propaganda children’s book, circa 1938.

The text reads: “Money is the god of the Jew. He commits the greatest crimes to earn money. He won’t rest until he can sit on a great sack of money, until he has become the king of money.

Professor David Feldman, the director of the Pears Institute for the Study of Antisemitism said the exhibition “confronts and debunks the stereotypes of Jews’ connections with money and power that give rise to some of the most deeply rooted antisemitic images in circulation.”

Merely denying that these stereotypes about Jews and money are not necessarily true doesn’t make them not true.  Of course, Jews joke about their penchant for money among themselves, but that’s okay because Jews get to decide what is true and what is funny and what is not.

This exhibit intentionally fails to mention that after being kicked out of England for 300 years for usury and ritual murder of children, the first thing the Jews did once they were readmitted to England under Cromwell was to establish the Bank of England and use it to consolidate the country’s wealth into jewish hands.

One of the oldest jewish ‘canards’ when it comes to money is that they claim that they became usurers only because Christian societies wouldn’t allow Jews to do anything else for a living.  That’s not true, of course; there were plenty of legitimate professions that Jews could have engaged in other than financial shenanigans.

And once Jews were emancipated and given equal status in Europe, they still continued to engage in easy money, which proves that Christians did not, in fact, force them to become loan sharks at all.

“It’s complicated,” is how the Jews describe these uncomfortable subjects.