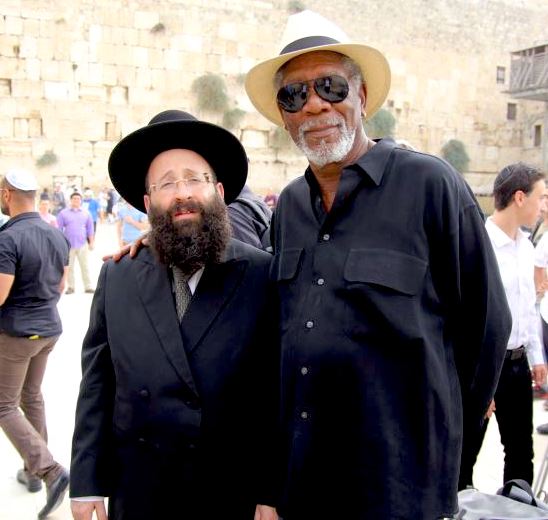 This time the veteran actor is appearing in an ad campaign for Tadiran, an Israeli company that produces air conditioning units.

The commercial, which began airing this week, features Freeman joking about being mistaken for the voice of God – due to his roles in Bruce Almighty and his booming, signature narration.

“Believe me folks, I am NOT God,” he says in the commercial. “Far from it. Except in my own home, where I can control the weather. Almost like God Himself.”

According to Ynet, Freeman was paid $300,000 to appear in the campaign. In a statement, Tadiran would only say that the full campaign cost millions of shekel to produce, and was filmed in Manhattan. Tadiran said Freeman has been chosen to be the company’s spokesman for the next three years, as he “suited us like a glove.”

But not everyone is thrilled to see the Israeli company partner up with the 81-year-old Oscar winner. Some Israeli women’s groups think Tadiran should not have partnered with a man who was accused of a litany of sexual harassment allegations.

Last year, eight women accused the actor of unwanted verbal and physical advances in the workplace. Several said he would regularly comment on their appearance and touch their lower back or stare at them. Freeman said while he may have used “misplaced compliments or humor” in the past, he never assaulted any women.

National Geographic halted production of his documentary series, The Story of God, and then resumed several months later after its investigation found “no incidents of concern during any of our work with Mr. Freeman.”

But some groups are not convinced.

“The decision of Tadiran to connect itself to someone who has been recently accused of more than eight allegations of sexual harassment – acts he didn’t deny, but explained away with a weak apology – does not advance us as a society toward a safer future,” said Miriam Zalkind, director of the Israel Women’s Network’s policy and legislation department. “We are sure that the public will prefer to buy its electronic items from companies that don’t choose to do business with a man who acts that way towards women.”

Orit Sulitzeanu, the director of the Association of Rape Crisis Centers in Israel, pointed out that – after the allegations – Visa and Pepsi dropped Freeman from their campaigns.

“It is sad that Tadrian thinks that these are the values with which they want to identify,” Sulitzeanu told Ynet. “This choice is puzzling and outrageous, and conveys a disconnect from the public, an avoidance of reality and spits in the face of sexual assault victims.”

Freeman owes his career to Jews in Hollywood who used him as a poster “house boy” for their anti-White, anti-Christian agenda, going so far as to rub it in our face when they portrayed God as a Black man.  But they had done this previously when they depicted God as a cigar-smoking Jew with George Burns. The Jews then cashed in on Freeman’s popularity portraying God by turning him into an “expert” in The Story of God, which was really nothing more than an attack on Christianity and the White race.

But like Bill Cosby, the noble savage Morgan Freeman turned out to be a sexual deviant and abuser of women, which secretly endeared him even more to his jewish handlers.  It seems that Jews have a penchant of promoting Black “role models” to White America who eventually confirm all the worst racial stereotypes we have about Blacks.  But Jews are also masters of rehabilitating all sorts of degenerates, and now they have their Black God selling air conditioners to Jews in Israel.