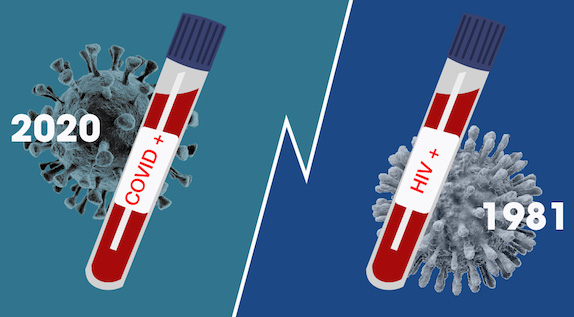 In order to ratchet up the fear factor about coronavirus, ensuring that it remains a threat for years to come, a couple of ‘researchers’ from Shanghai and New York are now claiming that the COVID-19 virus could attack the human immune system and cause damage similar to that found in HIV patients:

SCMP’s Stephen Chen reports from Beijing that Lu Lu of Fudan University in Shanghai and Jang Shibo of the New York Blood Center joined the living virus, which is officially known as SARS-CoV-2, to laboratory-grown T lymphocyte cell lines.

“They do this by capturing a cell infected by a virus, boring a hole in its membrane and injecting toxic chemicals into the cell. These chemicals then kill both the virus and infected cell and tear them to pieces.

“To the surprise of the scientists, the T cell became a prey to the coronavirus in their experiment. They found a unique structure in the virus’ spike protein that apparently triggered the fusion of a viral envelope and cell membrane when they came into contact.

“The virus’s genes then entered the T cell and took it hostage, disabling its function of protecting humans.”

The researchers did the same experiment with SARS, another coronavirus, and found that the SARS virus did not have the ability to infect T cells.

Further investigations into the coronavirus infection on primary T cells would evoke “new ideas about pathogenic mechanisms and therapeutic interventions”, the researchers said in a paper published in the peer-reviewed journal Cellular & Molecular Immunology this week.

Even the mainstream media has been forced to admit that a disturbingly high percentage of these findings of so-called ‘peer reviewed’ scientific experiments cannot be replicated in other labs under different circumstances.

And if the findings cannot be independently replicated, they are not, by definition, scientific.

Billions of research dollars are now being thrown at COVID-19 — even the Rothschilds have gotten on board — and this money gives all researchers an incentive to come up with ‘facts’ about the virus that will justify we continue to fear it long after the normal flu season has passed so as to justify a mass vaccination campaign.

And one of the greatest and most profitable medical fear campaigns ever promoted on the world stage was the fraudulent “HIV = AIDS” hysteria of the 1980s.

And not coincidentally Dr. Anthony Fauci was the ring leader of that fear campaign just as he is now with COVID-19.

So if you hear Fauci start comparing COVID-19 to HIV, you’ll know the fix is in if you don’t already.

But also keep in mind that after almost 40 years of research, they have never been able to come up with an effective vaccine for HIV, so perhaps comparing COVID-19 to HIV isn’t such a good idea after all.