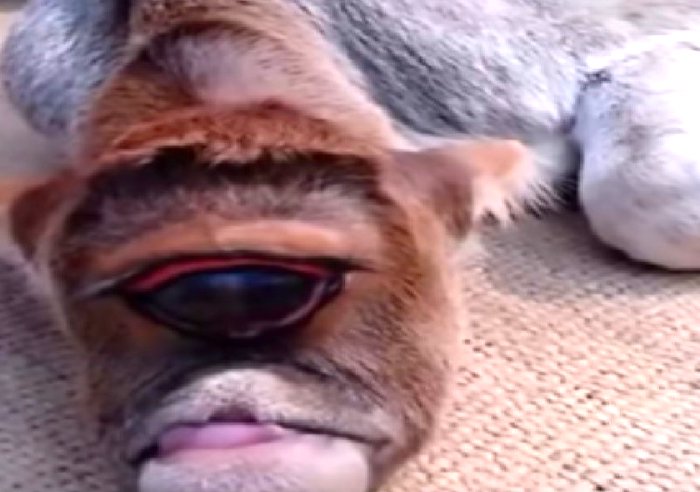 A deformed new-born one-eyed calf is being worshipped for its “supernatural” malformation in the east Indian state of West Bengal:

Locals in the Bardhaman district of the state of West Bengal have started worshipping a new-born one-eyed calf, and a video of the deformed animal has gone viral on the internet.

In addition to being born with just one eye, the animal also has a deformed jaw and was born without a bovine muzzle. Its breathing is also not normal — it gasps for air while sticking out its tongue in a bid to draw oxygen into its lungs.

According to medical journal Healthline, experts have opined that the animal is suffering from Cyclopia, a rare congenital disorder. The disorder develops while the fetus is still in the womb, after a central cavity develops in one eye when the two hemispheres of the brain do not separate cleanly.

This disorder can also be found in humans, resulting in similar eye-related malformations, such as fused eyeballs and the absence of eyelids.

Whenever there is an animal or person born with a disfiguring birth defect is born, India celebrates the birth of a new god.  India is the land of a thousand gods, and the more grotesque the better.  And keep in mind that these “spiritual” Indians have been crowned the guru figure heads of the New Age Movement.  Yes, the same ones that worship one-eyed birth defects are same ones who will show the White man the path to nirvana.

Somewhere along the line, White westerners got it into their heads that a spiritual guru had to come from a Third World hellhole in order for them to have any ‘divine’ authority.  Ignorance, chronic poverty, and disease are the hallmarks of “spiritual transcendence” in our New Age where yoga and meditation replace prayer, and vegetarianism and lattes replace Christianity.  No wonder we’ve imported millions of these Indians to the West — exactly what we are lacking.