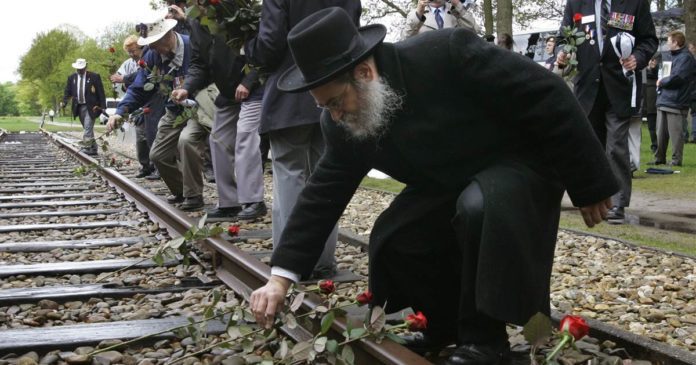 After many years of legal wrangling, Jews in the Netherlands have finally succeeded in extorting “reparations” out of NS, the Dutch national train service, which, they claim, transported Jews to a transit camp during World War II:

This puts an end to a battle between NS and Salo Muller, whose parents were transported to Westerbork on an NS train in 1941, when he was five years old. They spent nine weeks in the camp before being transported to Auschwitz, where they died in a gas chamber.

“We have decided not to legally confront each other, but to set up a committee”, Van Boxtel said to Nieuwsuur. “The committee will find out how we can give form to an individual compensation for those affected.” How high the damages will be, and who exactly will be entitled thereto, is not yet known.

Muller called the rail company’s announcement “extraordinary”. “It is a result that I might have dared to dream about, but that I did not expect. It made me very emotional and I am grateful that it happened”, he said to the program. “It means that NS recognizes that the suffering has not lapsed. That the suffering continues to exist for many Jewish people. That is why I am so happy that NS now recognizes that it has to pay damages on moral grounds.”

NS did not resist against the Nazis order to deport Jewish people to camp Weserbork. The company earned around 2.5 million euros converted in these transports. In 2005 NS openly apologized for its role in the war. To commemorate the victims, NS supports a number of projects, such as contributing 1 million euros to renovate Westerbork, according to Nieuwsuur. Until now, NS refused to pay individual compensation for the victims and their relatives.

Let’s be clear: Westerbork was a transit camp in the Netherlands — it was not a work camp, or a so-called “extermination” camp.  Jews were transported there so that the Germans could then decide at which work camps they were most needed to help support the German war effort.

Not one historian can prove that anyone in the Netherlands at the time knew of anything “sinister” about this transport agreement.

Either way, this extorted money isn’t going to any Jews who survived the war and are still living — rather, it is going to their descendants, even great-grandchildren.

And this is how the Jews are going to keep the so-called holocaust reparations flowing even long after the last jewish holocaust “survivor” is long dead.

At a certain point, every Jew in every country is going to be eligible for reparations, and the goyim will continue to pay because from the jewish perspective, we are all Nazis, and we all have a share of responsibility for what they claim happened to them in WWII.