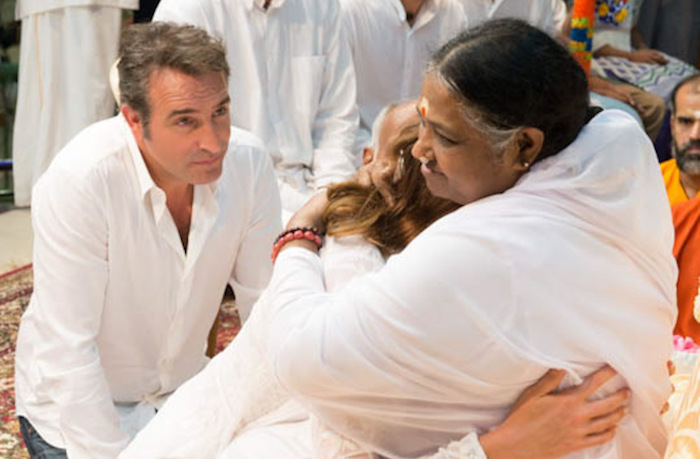 Amma, the international “Hugging Guru,” who has made millions of dollars spreading her message of “universal compassion,” is on the European leg of her tour, but seating is limited so get your tickets early:

It would seem to many that the world is becoming more divided and the gaps between us grow more laborious to bridge every day. Most of us are aware of this, concerned about what future trials this shift may present.

However, it is seldom often someone truly strives to bring people together. Mata Amritanandamayi, more commonly known as Amma, stands as a symbol of what compassion and community can do to better the world.

Amma is a spiritual leader from India known for her humanitarianism and spiritual teachers. She also authored many important books such as ‘Compassion: The Only Way to Peace’ and ‘The Eternal Truth’.

Since 2005, Amma and her NGO, Embracing The World, have donated 75 million US dollars to disaster relief, built more than 51,000 homes for homeless and helped more than 100,000 women in starting their own businesses. These represent but just a few of her achievements.

Amma will come to Denmark between October 23 – 24 to spread compassion by giving out hugs, of which she has given 38 million across the world, conduct peace ceremonies (Puja) and practice guided meditation.

The event will be free and take place at Brøndby Hallen, where these will be traditional Indian and Danish food. For further information, you can visit www.amma-danmark.dk, where you can find the program and read more about Amma.

Even if a hug took only 10 seconds, it would be impossible for Amma to hug 38 million people in 10 lifetimes, but let’s not be overly critical when it comes to changing the world one hug at a time.  Denmark, like the rest of western Europe, is in serious decline and under threat of islamification because it has rejected the Christian foundations upon which it was built.  And into that spiritual vacuum walks the likes of Amma, the hugging guru who takes your money and puts it toward jewish socialist causes under the auspices of the U.N.

Indian “gurus” like Amma started showing up in Europe and America after World War I under the auspices of the League of Nations as part of an international effort to create a one world religion which would eventually undermine and replace Christianity.  The mantra of the New Age is “I’m spiritual but not religious,” and that spirituality consists of going to yoga classes and getting hugs from Amma when she swings into town.   The poverty and disease that is rampant in India is a reflection of its true “spirituality”, and it’s also what’s in store for White Europeans if they don’t return to their Christian roots.