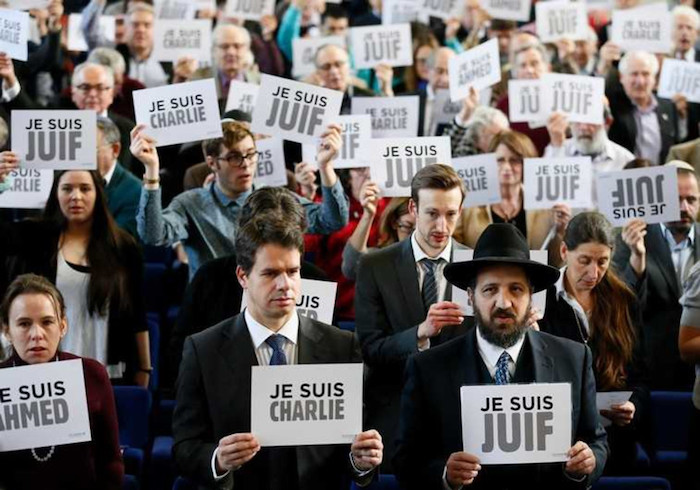 Between 2015 and 2017, the Pew Research Center surveyed 56,000 adults in 34 European countries and found that western Europeans were far more likely to accept Jews into their families than those in Eastern Europe:

Eastern Europeans are far less willing to have Jews in their families or as their neighbors than their Western European counterparts, a gap that is even more pronounced when it comes to attitudes toward Muslims.

According to an analysis of a series of surveys by the Pew Research Center carried out from 2015 to 2017 among some 56,000 adults in 34 European countries, the gap between Europe’s two halves is significant.

The figures are also largely unchanged among young adults, aged 18-34, suggesting that current attitudes are likely to remain constant for the foreseeable future.

Only 40 percent of Russians said they “would be willing to accept Jews as members of their family,” and just 35% of Greeks, 43% of Ukrainians, 51% of Czechs and 57% of Poles.

Among Western European nations, meanwhile, the figure was 69% in the United Kingdom and Germany, 76% in France, 79% in Spain, 89% in Belgium — and was at its highest in the Scandinavian countries: 92% in Sweden, 92% in Denmark and 95% in Norway.

Only 5% or less in Scandinavian and northern European countries said they would reject Jews as their neighbors, with the highest figure in Western Europe being 12%, in Italy.

The corresponding figures given for Eastern Europe were divided by religious affiliation within each country. Rejection of Jews as neighbors was as high as 33% among Armenia’s Christian Orthodox and 30% among that population in Romania. In Lithuania and Ukraine, 24% and 21% of Catholics, respectively, said they wouldn’t accept Jews in their neighborhood.

The East-West gap is even more pronounced when it comes to Muslims, who are less liked than Jews in every European country except Muslim-majority Bosnia.

In the East, just 34% of Russians said they would accept a Muslim in the family, 31% of Greeks, 25% of Ukrainians, 12% of Czechs and 33% of Poles. Among Orthodox Christians, 77% in Armenia, 48% in Latvia and 40% in Belarus said they would reject Muslims as neighbors. Some 66% of Catholics in the Czech Republic and 56% of that population in Lithuania also said so.

Acceptance of Jews and Muslims tends to correspond to the extent to which citizens of a particular country view their religious identity as fundamental to their national identity. In Greece, for example, where few want either Muslims or Jews in their families, 76% agreed with the statement that “to truly share their national identity” one needs to be Greek Orthodox. In Russia and Ukraine, 57% and 51% believe belonging to the national Christian church is fundamental to belonging to the nation.

Jews will point to these results and use them as “proof” of how “antisemitism” is still a serious problem, especially in White Christian countries like Poland and Hungary.  But the Jews should be encouraged on two fronts — first, western Europe has largely become judaized and adopted jewish values and worldviews.  The proof is that all these countries are now in serious decline, both economically and racially.  This is something that Jews can hang their hats on and proclaim, “Mazel Tov!”

Second, orthodox Jews do not want to be assimilated, so they should welcome this news that Eastern Europeans reject the idea of having Jews in their families.  This intolerance will ensure that Jews will remain Jews, and Christians will remain Christians, and true “diversity” will survive in the East.  Prospects for the survival of diversity in western Europe seem much more dismal, as most families are race mixing or accepting race-mixed people into their families, thus blurring racial and religious lines.