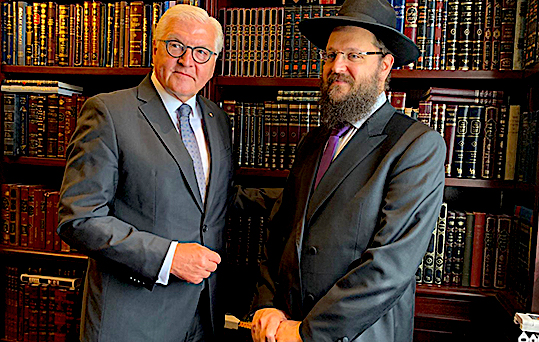 On Shabbat, July 27, international media outlets reported that Rabbi Yehuda Tiechtel claimed two “Syrian” men spat on him and called him mean names after leaving his synagogue in west Berlin:

“Unfortunately, the aggressions against Jews have developed a life of their own,” shared Rabbi Tiechtel in a statement to the press. The rabbi and one of his children had been leaving synagogue in western Berlin after leading a prayer service, when he was confronted by two Syrian men.

But this week, Germany showed its intolerance of the incident when President Frank-Walter Steinmeier showed up on the rabbi’s doorstep. “I have come here to say that there is no place for anti-Semitism in Germany. I am here to declare this, as well as to visit a friend,” said the president.

He then expressed interest in the Jewish activities in the German capital and, together with Rabbi Tiechtel, discussed the Lubavitcher Rebbe’s [Schneerson] message of spreading light to combat darkness.

Rabbi Tiechtel, who presented the president with a dollar that he had received years back from the Lubavitcher Rebbe, shares, “I remain convinced that most people in Berlin do not want to accept this aggression against Jews as a sad part of everyday Jewish life. Most people in Berlin want Jewish people to be able to live their Judaism openly without being afraid of being insulted, spat at or even beaten. Of course, we will not hide now, but continue to build on love, tolerance, dialogue and education.”

The learned rabbi has amazing powers of observation in his supernatural ability to identify these random Arabs on the street as specifically Syrian.  Do Syrians dress differently from other Arabs in Berlin, or did these Syrians happen to volunteer their nationality to the rabbi before the spit on him and called him names?  And as is typical of these jewish tales of victimhood, the rabbi fails to mention why the Syrians “attacked” him out of the blue, for no reason whatsoever.

In the last few years, literally thousands of White ethnic Germans have been raped, robbed, attacked, molested, verbally abused, stalked, harassed, and murdered by these Muslim “refugees,” but how many of them have received an unannounced personal visit from the President of Germany?  And with all this serious migrant crime to investigate, why are the police devoting any manpower to finding and punishing these “Syrians” who merely spat on this rabbi and called him mean names?  Apparently, not all animals on the farm in Germany are created equal.