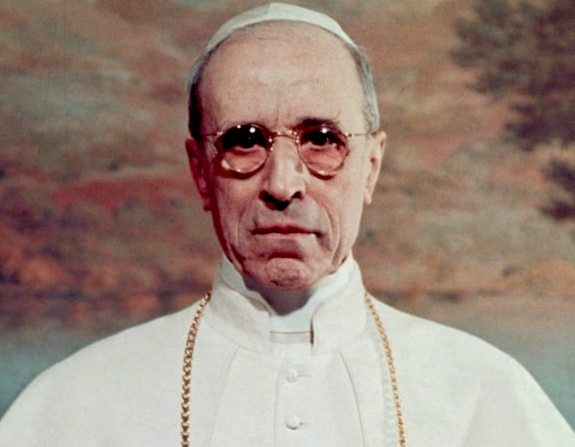 After 30 years of pressure from jewish groups to open its archive of documents concerning Pius XII during World War II, the Vatican will open the material to the public by 2020:

Declaring that the church “isn’t afraid of history,” Pope Francis said Monday he has decided to open up the Vatican archives on World War II-era pope Pius XII, who has been criticized by Jews for staying silent on the Holocaust.

Francis told officials and personnel of the Vatican Secret Archives that the archive would be open to researchers starting March 2, 2020.

Pius was elected pontiff on March 2, 1939, six months before World War II erupted in Europe. Pius died on October 9, 1958, at the Vatican summer residence at Castel Gandolfo, near Rome.

The Vatican usually waits 70 years after the end of a pontificate to open up the relevant archives. But the Holy See has been under pressure to make the Pius XII documentation available sooner and while Holocaust survivors are still alive.

Vatican archivists had already started preparing the documentation for consultation in 2006, at the behest of Francis’s German-born predecessor, Benedict XVI.

Pius has been accused by historians and Jewish groups of failing to speak out against the Holocaust, failing to commit the Church to saving Jews amid the genocide, and encouraging the conversion of Jews to Catholicism during the period.

The Vatican has defended him, saying he used behind-the-scenes diplomacy to try to save lives. Francis indicated he, too, embraced that interpretation.

Pius’s actions will be scrutinized as part of efforts underway to decide if he should be declared a saint. Francis indicated that the church was confident that the papacy would withstand the findings by historians studying the archives, saying Pius was “criticized, one can say, with some prejudice and exaggeration.”

“The church isn’t afraid of history, on the contrary, it loves it, and would like to love it even more, like it loves God,” Francis told staff at the archive.

“Thus, with the same trust of my predecessors, I open, and entrust to researchers, this patrimony of documentation.”

He said the Pius papacy included “moments of grave difficulties, tormented decisions of human and Christian prudence, that to some could appear as reticence.” Instead, he said they could be seen as attempts “to keep lit, in the darkest and cruelest periods, the flame of humanitarian initiatives, of hidden but active diplomacy” aimed at possibly “opening hearts.”

…“It is particularly important that experts from the leading Holocaust memorial institutes in Israel and the US objectively evaluate as best as possible the historical record of that most terrible of times, to acknowledge both the failures as well as the valiant efforts made during the period of the Shoah,” AJC’s Rabbi David Rosen was quoted by Reuters as saying.

Reading between the lines, it should be obvious what this development is really about — the Jews are itching to nail the Vatican with a “smoking gun” that will prove their “complicity” with the Nazis to either “exterminate” the Jews directly or intentionally “looked the other way” knowing full-well about the evil intent of the Nazis.  They won’t find any such “smoking gun” because neither scenarios are true, but that won’t stop these jewish “researchers” from claiming they’ve found one.

And once they’ve revealed their findings to the world, implicating the Vatican in the so-called Holocaust, international jewish organizations will demand “reparations” to the tune of billions of dollars.  This demand for “reparations” will be fast-tracked to make sure this “well-deserved but long-overdue” money will get into the hands of Holocaust survivors — or their descendants — hopefully while they are still alive.  So between the payouts for sexual misconducts of some priests and now the Holocaust, perhaps the Jews can finally bankrupt the Catholic Church for good.