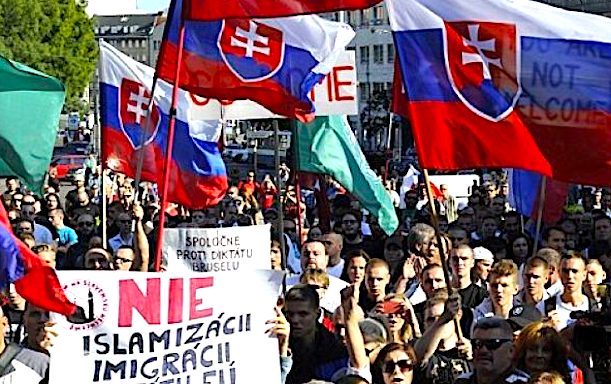 Slovakia — a nation whose Christian history and culture reaches back over 1,000 years — has officially banned mosques from being established anywhere in the country, and thereby effectively banning Islam from the Central European nation:

Slovakia has introduced measures making it the country with the toughest laws against Islam in all of Europe.

In 2016, two-thirds of deputies, including opposition ones, voted in favor of legislation submitted by the governmental Slovak National Party (SNS). The laws required religious groups in the country to have 50,000 followers to run their schools, open religious establishments or qualify for government subsidies.

Previously, the law only required 20,000 signatures.

According to official sources, Islam, which was primarily targeted by the law, has less than 5,000 followers and zero mosques in the landlocked country in the center of Europe.

In 2016, then Prime Minister Robert Fico said in an interview, “I’m sorry, Islam has no place in Slovakia….It is the duty of politicians to talk about these things very clearly and openly….I do not wish there were tens of thousands of Muslims.”

…Other politicians have also been open about the fact they do not want the Muslim population to grow in Slovakia.

“Islamization begins with kebab and is already underway in Bratislava. Let’s realize what we can face in five or ten years,” said SNS Chairman Andrej Danko in 2016…

Until now, Slovakia is the only EU Member State where there is no official mosque.  Instead, the Muslim community in the country meets in rented houses or temporary prayer rooms…

In the neighboring Czech Republic, for example, the Community of Buddhism, which mainly the local Vietnamese community follows, recently applied for registration.  However, the Czech Ministry of Culture did not comply with the application for the third time…

But there are only a few Muslims in both countries; in the Czech Republic, Muslims accounted for less than 0.1 percent of the total population.

Yes, and that 0.1% is 0.1% too many — and this is not just about “Muslims”; it’s about Arabs who can potentially be racially absorbed into the general population, turning more and more people into Arabs.

The word “arab” comes from the Hebrew word “ereb” which means to “grow dark”, and it was used to describe those Israelites who succumbed to forbidden race mixing (Deuteronomy 23:2), whose “seed” or offspring were “touched with the tar brush” as it were, visibly darkened.

However, since it is strictly illegal in the European Union for any nation to declare that it wishes to remain racially pure, their only recourse is to demand that they remain historically and culturally Christian — as religious freedom is guaranteed as an EU fundamental right.

Up until the second half of the 20th century, the term “Christian” was virtually synonymous with “White man” — and by insisting on maintaining its Christian identity, countries like Poland and Slovakia, will be able to legally maintain their White racial identity without overtly proclaiming that agenda.

And the nation wrecking Jews who control the EU know this — which is why they pressure all EU member states to take in non-White “refugees” — Islamification isn’t about just destroying Christianity — it’s about destroying the White race.

That is why crypto-Jews who infiltrated the Catholic Church, such as the Jesuits and Dominicans, heavily promoted converting non-Whites in the Third Word — and attacked the purity of blood laws in Spain — Jews hate purity, both moral and racial.

Christianity cannot and will not survive without the White race — and vice versa.

This statue in Bratislava, Slovakia, is emblematic of the EU Whore and its seductive Judeo-AntiChrist death cult that beckons Christian Slovakia: 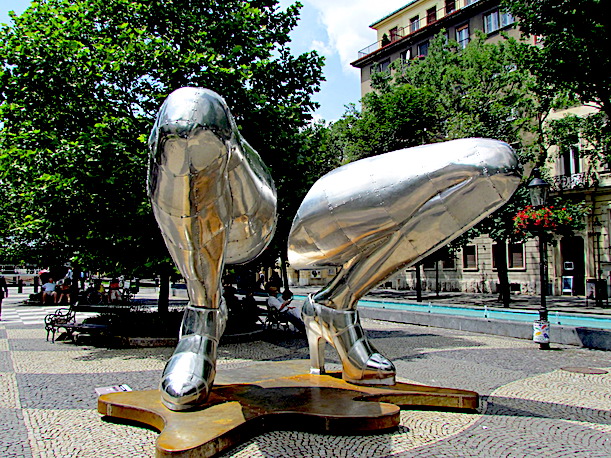