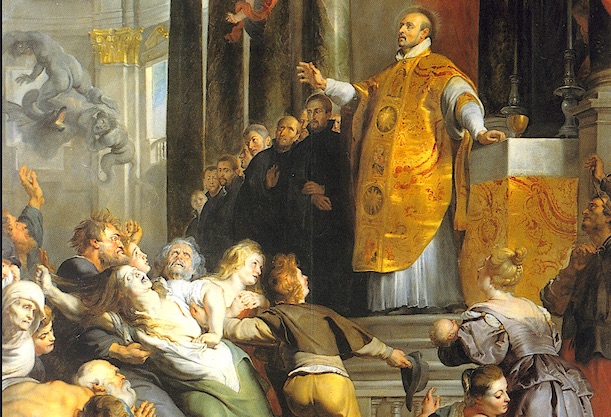 Here is an interesting, short interview with Robert Maryks, who appears to be a Jewish college professor (he received an award from The Center for Advanced Holocaust Studies) whose specialty is the Jewish influence on the early Jesuit Order in the Catholic Church.

In his book, The Jesuit Order as a Synagogue of Jews: Jesuits of Jewish Ancestry and Purity-of-Blood Laws in the Early Society of Jesus, Maryks details the significant role of “conversos’’ — Jews and their descendants who appear to have converted, at least superficially, to Catholicism before and during the Spanish Inquisition:

Q. Did the conversos come about because of the Spanish Inquisition?

A. Not exactly. Most people think of Jewish conversion in Spain as the one that took place in 1492, but there were other massive conversions in the 14th century, if not earlier. A wave of pogroms occurred in 1391 which resulted in the creation of very affluent and influential conversi in Spanish society. Mostly they were top royal administrators or ecclesiastical figures. It was very symbolic when the chief rabbi of Burgos converted to Catholicism before the pogroms and went on to become bishop of the same city.

Q. Why was the Jesuit order so inclusive in its early days?

A. Ignatius of Loyola, the Basque who founded the Jesuit order in 1539, was joined by men who came largely from Iberia. It was a liberal order for the first three decades. Loyola was very open to accept candidates of Jewish ancestry into the order. He made sure there was no discrimination among candidates. One of the founding fathers was a converso. The Society of Jesus was substantially influenced by Christians of Jewish ancestry.

Q. So where did the purity-of-blood laws come from?

A. This class of conversos were definitely accepted by a good number of people and some were protected by royal powers, but other officials resented their power. This led to the first anti-converso pogroms in Castille in 1449 and a law in that year by the mayor of Toledo that deprived conversos of government jobs because their blood was impure because of Jewishness.

Q. And life got worse for the conversos?

A. Yes. The archbishop of Toledo issued a purity-of-blood law in 1547. So the foundation of the Jesuits coincided with the increase of purity-of-blood laws. In 1593, the society issued a law which said that no candidate of Jewish ancestry could enter the society, and those conversos already in the society who had not finished their vows had to leave. This was much harsher than the first because it did not limit the genealogical inquiry. In 1608, an inquiry was set at five generations.

Q. How long did this law last?

A. It existed until 1946, when, after the Holocaust, the law was abrogated. Some Italian fascists reminded the Jesuits that their purity-of-blood laws were even harsher than the German ones. The Nazis checked fathers and grandfathers. The Jesuits went far beyond that.

Jews didn’t have to submit to forced conversion in Spain — they could have simply packed their bags and gone elsewhere, just as the “wandering Jews” had done throughout their history.

And in the wake of the Inquisition, many Jews did indeed leave Spain for the New World instead of converting.

But joining the Church was an easy way for Jews to rapidly rise in Spanish society — it was literally their ticket to success, and many took it, without ever intending to truly convert to Christianity.

Despite these “purity of blood” requirements, the Jesuit Order maintained its reputation of being a safe haven for crypto-Jews all the way to the present day.

It’s no wonder that the Judeo-Masonic Order of the Illuminati was founded by a converso Jesuit, Adam Weishaupt — and Masonic membership plagued the Church off and on through its history..

But just because the Jesuits ‘officially’ wouldn’t accept crypto-Jews didn’t mean they were necessarily barred from the Catholic Church completely — the Dominicans, for example, also had a reputation as being tolerant of crypto-Jews.

This controversy over whether or not Jews could truly convert to Christianity went to the heart of the faith — and the converso “judaizers” were indeed powerful enough to successfully undermine the purity of blood requirement for the Church overall.

It was, in fact, Jews within the Catholic hierarchy who self-servingly proclaimed that Christianity, contrary to scripture, was open to everyone, regardless of race — and the warnings in the Gospel of John were conveniently ignored.

You can read a full review of Maryks’ book at the Occidental Observer.

You can read the book online here for free — hard copies of this book already cost more than $100 used.