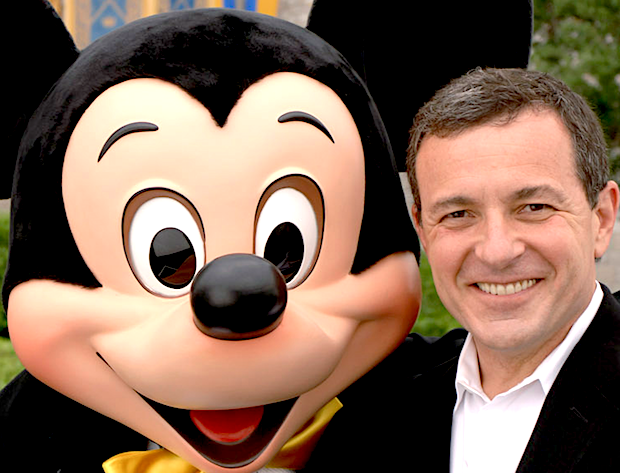 [Iger stated] “Hate and anger are dragging us toward the abyss once again, and apathy is growing … consuming our public discourse and shaping our country into something that is wholly unrecognizable.”

“Our politics, in particular, are now dominated by contempt,” Iger added, and suggested that “Hitler would have loved social media,” because it is “constantly validating our convictions and amplifying our deepest fears” and “makes it far too easy to deny our shared humanity.”
Advertisement

Iger reminded his audience that “it is possible to argue policy without attacking people” and that “we have to change how we talk to each other.”

“Maybe we should just start by reconnecting with those friends and family members that we haven’t spoken to since the 2016 election,” he mused.

Born in 1951 to a Jewish family in New York City, Robert Allen Iger was raised on Long Island, in Oceanside. Iger married his second wife, journalist Willow Bay, in a Jewish and Roman Catholic interfaith service in Bridgehampton, New York.

In 2012, Steven Spielberg, founder of the USC Shoah Foundation Institute for Visual History and Education, presented Iger with the Ambassador for Humanity Award.

Iger called on US politicians to “reject hate in all forms” in the 2020 presidential election, noting that “Social media allows evil to prey on troubled minds and lost souls and we all know that social news feeds can contain more fiction than fact, propagating vile ideology that has no place in a civil society that values human life.”

Basically, powerful Jews like Iger are worried that with the internet they have lost their controlling monopoly on the narrative which they have enjoyed and exploited to their advantage since the end of World War II.  The internet ended that “Golden Age” of jewish control and hegemony of virtually all media outlets, and judging by their feverish attempts at censoring social media, they certainly are not comfortable with the idea that any opposing voices might be heard.

For liberal Jews like Iger, “rejecting hate” means calling anyone who opposes their radical agenda a dreaded “Nazi”.  In reality, the internet has awakened millions of people to the possibility that calling someone a “Nazi” may eventually turn into an unintentional compliment.  Every time a Jew invokes the Nazis to shut down a debate, they water down whatever power that term may have, and considering we now hear it hundreds of times a day in the media, we no longer feel the sting of being labeled a Nazi or any other cartoonish Hollywood version of a White person who can think for themselves.