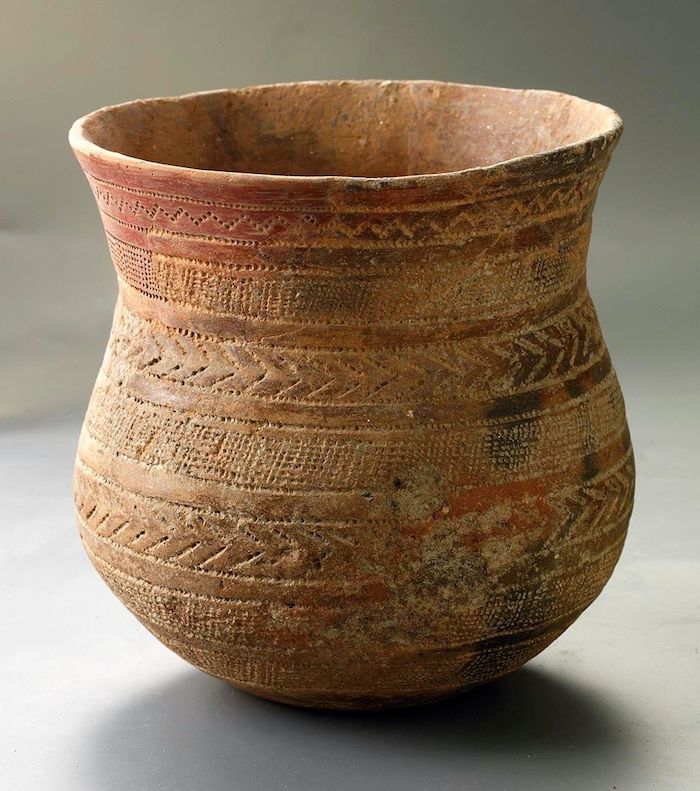 The theory that modern Europeans are descendants of “indigenous” Stone Age cavemen has become more and more untenable as  DNA studies are revealing that our earliest ancestors, especially the Linearbandkeramik (LBK) cultures, migrated up into Europe from the Near East and Anatolia:

In Europe, the Neolithic transition (8,000–4,000 b.c.) from hunting and gathering to agricultural communities was one of the most important demographic events since the initial peopling of Europe by anatomically modern humans in the Upper Paleolithic (40,000 b.c.).

However, the nature and speed of this transition is a matter of continuing scientific debate in archaeology, anthropology, and human population genetics. To date, inferences about the genetic make up of past populations have mostly been drawn from studies of modern-day Eurasian populations, but increasingly ancient DNA studies offer a direct view of the genetic past.

We genetically characterized a population of the earliest farming culture in Central Europe, the Linear Pottery Culture (LBK; 5,500–4,900 calibrated b.c.) and used comprehensive phylogeographic and population genetic analyses to locate its origins within the broader Eurasian region, and to trace potential dispersal routes into Europe.

We cloned and sequenced the mitochondrial hypervariable segment I and designed two powerful SNP multiplex PCR systems to generate new mitochondrial and Y-chromosomal data from 21 individuals from a complete LBK graveyard at Derenburg Meerenstieg II in Germany. These results considerably extend the available genetic dataset for the LBK (n = 42) and permit the first detailed genetic analysis of the earliest Neolithic culture in Central Europe (5,500–4,900 calibrated b.c.).

The results reveal that the LBK population shared an affinity with the modern-day Near East and Anatolia, supporting a major genetic input from this area during the advent of farming in Europe. However, the LBK population also showed unique genetic features including a clearly distinct distribution of mitochondrial haplogroup frequencies, confirming that major demographic events continued to take place in Europe after the early Neolithic.
Author Summary

The transition from a hunter–gatherer existence to a sedentary farming-based lifestyle has had key consequences for human groups around the world and has profoundly shaped human societies. Originating in the Near East around 11,000 y ago, an agricultural lifestyle subsequently spread across Europe during the New Stone Age (Neolithic).

Whether it was mediated by incoming farmers or driven by the transmission of innovative ideas and techniques remains a subject of continuing debate in archaeology, anthropology, and human population genetics. Ancient DNA from the earliest farmers can provide a direct view of the genetic diversity of these populations in the earliest Neolithic.

Here, we compare Neolithic haplogroups and their diversity to a large database of extant European and Eurasian populations. We identified Neolithic haplotypes that left clear traces in modern populations, and the data suggest a route for the migrating farmers that extends from the Near East and Anatolia into Central Europe. When compared to indigenous hunter–gatherer populations, the unique and characteristic genetic signature of the early farmers suggests a significant demographic input from the Near East during the onset of farming in Europe.

Once we cut through all the cultural marxist buzzwords and evolutionary obfuscations in this article, we can see two opposing theories that are not easily reconcilable.  They want to maintain that European ancestry included these early “hunter-gatherers” whose lifestyle conveniently resembles Blacks from sub-Saharan Africa, but they also have far more objective DNA evidence that suggests this wasn’t the case at all — that White Europeans found their origins in the Near East (Levant) and Anatolia (Turkey).

To keep both theories afloat, they make the unsubstantiated claim that the early farmers who migrated up into Europe from the Near East somehow “interbred” with the “indigenous” hunter-gatherer cavemen, creating a hybrid or proverbial “missing link”.  That’s the equivalent of claiming that the White modern Australians must be genetic descendants of Aborigines who interbred with the earliest White settlers.  It’s highly unlikely that people who migrated up into Europe from a sophisticated culture in the Near East would find hunter-gatherers to be suitable marriage material, unless you’re a cultural marxist with an anti-White agenda.