Poland Vows to ‘Defend Christian Europe’ Against the Pro-Migration EU 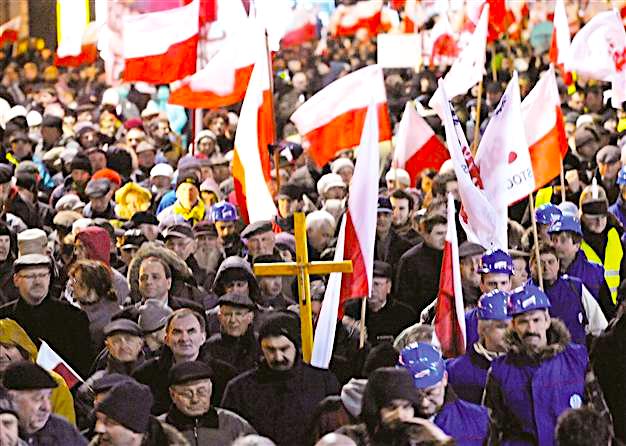 The Stefan Batory Foundation, a Polish NGO established by billionaire globalist George Soros and a group of Polish opposition leaders in the 1980s, has issued a paper calling on EU authorities to step up their antagonism towards the ruling party Law and Justice in Poland, saying that the entire survival of the Union depends on it:

“The battle for the rule of law in Poland sets a precedent and is effectively a battle for the survival of the EU”, the document reads, defining the EU as a community in which each member nation’s laws abide to a “similar standard”.

The paper praises the European Commission for its efforts to thwart Polish judicial reforms that Warsaw says aims to overhaul a corrupt and unaccountable system.

The Foundation’s call comes despite a growing frustration with the EU’s interference in internal affairs, which has already resulted in Poland reviewing its legislation to determine whether EU laws are compatible with Polish domestic laws.

In recent years, the Foundation has worked on projects to “prepare Polish society for reception of refugees”, to “form positive attitudes towards” a mass influx of Middle Eastern migrants, and training tens of thousands of professionals and officials in various roles to fight “prejudice towards minority groups” as well as “hateful online comments”.

Poland has adopted a tough anti-migration policy, refusing to take Middle Eastern and North African migrants, which Brussels has tried to force member states to accommodate. Other European nations have followed suit, with Hungary and Austria being among the least willing to accept migrants.

Jacek Czaputowicz, Polish foreign minister, and his Hungarian counterpart, Péter Szijjártó, said during a press conference in Budapest earlier this week that the two nations would continue to defend a Christian, pro-sovereignty Europe in the face of attempts by the Brussels establishment to force mass migration “down nations’ throats“.

Both countries believe that Europe’s Christian heritage must be protected, Szijjártó said during the press conference after the meeting with his Polish counterpart.

“The bureaucrats in Brussels have launched a campaign of revenge” against Hungary and Poland but the two countries “will not give in”, he said, according to Hungary Today.

“The attacks by Brussels lack an authentic reason, they are only based on political motivation because Hungary and Poland do not want to become a country of immigrants and go against Brussels’ migrant policies”, the minister said.

The lead up to WWII started over a dispute with Poland, and now 80 years later Europe finds itself at another cross roads that could determine its fate, with Poland again as a pivotal country in the ongoing conflict.  As long as Poland exercises its religious freedom to remain Christian, a freedom guaranteed by the EU, it will virtually guarantee that it will remain a White ethno-state.  The EU cannot legally deny them this right of self-determination, though that won’t stop them from trying.

So any country in Europe that willingly gives up its identity as Christian, such as Sweden or France, has no legal leg to stand on to defend the rights of White people as White people.  And if Poland relinquishes its identity as a Christian nation, right in the heart of Europe, what can we honestly believe the fate of Europe will be?  Soros knows, and that is what this renewed attack on Poland’s freedom is all about.