How A Rich & Powerful Jew Destroyed Edwin Armstrong, One Of America’s Greatest Inventors 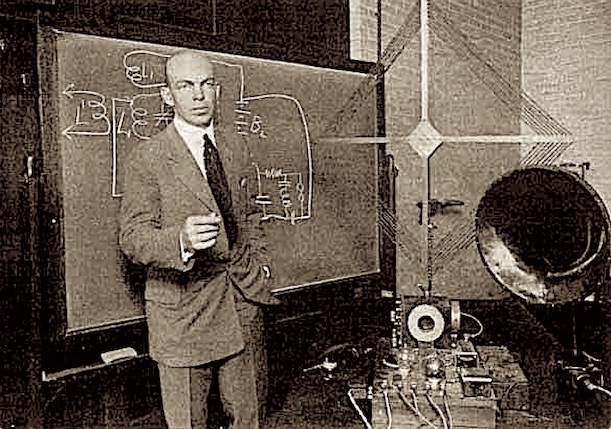 Today, the name of Edwin Armstrong should be known to every American school child at least as well as Alexander Graham Bell and Thomas Edison, but thanks to the unscrupulous and rapacious behavior of a Russian Jew named David Sarnoff, Armstrong’s life ended in tragic anonymity:

In 1934, much of the world was in the grip of the Great Depression. Unemployment was an epidemic, and many businesses struggled desperately to survive. One notable exception to these economic troubles, however, was the radio industry. Broadcasters in the US were making upwards of two billion dollars a year, and they owed much of their success to the innovations of a brilliant man named Edwin Armstrong. Twenty years earlier he had significantly improved the sensitivity and quality of radio receivers with his invention of the regenerative circuit in his junior year of college, and he went on to further improve them with his Super Regenerative circuit and Super Heterodyne receiver. These laid the foundation for the success of radio broadcasting⁠— in fact, almost any radio you buy today will still incorporate these innovations. But in 1933, Armstrong brought about an even more revolutionary change in the broadcasting business: FM radio.

In spite of these brilliant technical achievements, Armstrong saw little financial benefit from his inventions. Many of his ideas were plundered by unscrupulous people, a trend which ultimately led to Armstrong’s tragic and premature death.

The first of Armstrong’s technology troubles began in 1922 when he lost a patent lawsuit for the rights to the regenerative circuit. A man named Lee De Forest had patented the same invention in 1916⁠— two years after Armstrong’s patent was granted⁠— and sold the rights to AT&T. A long and bitter legal dispute followed, which progressed all the way to the US Supreme Court. Utterly failing to grasp the technical facts in question, the Supreme Court ruled in favor of De Forest, and stripped Armstrong of his patent. Despite the scientific community’s certainty that Armstrong was the inventor of the regenerative circuit, Armstrong lost the patent battle which spanned twenty-one years, thirteen court rulings, and thirty judges.

In the meantime, between court appearances and legal meetings, Armstrong continued to innovate. He started to work on the “static problem” which plagued early radios, despite some colleague’s assertion that static could never be eliminated. At the time, radio was transmitted via Amplitude Modulation (AM), which varied the amplitude of the radio waves. This gave the signal a much wider reach, but resulted in poor-quality sound. Armstrong sought to improve the signal quality by instead varying the radio waves’ frequency, creating Frequency Modulation radio (FM). He won a patent for FM radio in 1933, and the following year he did his first field test when he broadcast an organ recital in AM and FM signals from the top of the Empire State Building. The AM broadcast was static-filled and the FM broadcast was clean and rich. Listeners were shocked by the difference. Later, in experiment after experiment he proved the on-air differences and improvements in sound.

Just before World War 2, Armstrong successfully lobbied the FCC to create an FM broadcast spectrum between 42 and 50 MHz. He built an experimental station and 410-foot tower at a cost of $300,000 in Alpine, New Jersey. He started a small network of high-powered FM stations in New England called the Yankee Network, and began manufacturing receivers to pick up the broadcasts. To all who heard the fledgling network, its quality was astounding. The broadcasts could deliver the entire range of human hearing between 50 and 15,000 cycles while AM delivered only 5,000 cycles. A club for FM radio enthusiasts started in pre-war New York, and launched its own magazine called FM. Armstrong was trying as hard as he could to prove the superiority of FM broadcasts… all people had to do was listen.

Armstrong went on to prove that FM was capable of dual-channel transmissions, allowing for stereo sound. This capability of FM could also be used to send two separate non-stereo programs, or a facsimile and telegraph message simultaneously in a process called multiplexing. He even successfully bounced a FM signal off the moon, something not possible with AM signals.

Of course AM radio was big business in the pre-television days, and there were powerful people who wanted things to stay as they were. Innovation only meant smaller profits for them. At that time there was no more influential man in radio media than the founder of RCA, David Sarnoff. Known as “The General,” Sarnoff controlled all the technical aspects of radio; he also created the NBC and ABC television networks. He was also an important early supporter of television and developed the current NTSC standard for TV that we have used for over 60 years.

Seeking to kill FM radio before it could threaten his profits, Sarnoff’s company successfully lobbied the FCC to have the FM spectrum moved from Armstrong’s frequencies to the ones we use today: 88 to 108 MHz. That move, which occurred on 27 June 1945, immediately rendered Armstrong’s Yankee Network obsolete, along with all of the FM radio sets which had been produced. The cost to re-equip the stations for the new frequencies would be enormous. The FCC ruling said that the 40 MHz band was to be used for the new television broadcasts, in which RCA had a heavy stake. RCA also had an ally in AT&T, which actively supported the frequency move because the loss of FM relaying stations forced the Yankee Network stations to buy wired links from AT&T. The deck was stacked against the future of FM broadcasting.

Matters became worse when Armstrong became entangled in a new patent suit with RCA and NBC, who were using FM technology without paying royalties. The cost of the new legal battle compounded the financial burden that the problems with the Yankee Network had caused. His health and temperament deteriorated as the FM lawsuit dominated his life. His wife of thirty-one years, unable to cope with his worsening personality and financial strain, left him in November of 1953. RCA’s greater financial resources crushed Armstrong’s legal defences, and he was left penniless, alone, and distraught.

On February 1, 1954, Armstrong’s body was discovered on the roof of a three-story wing of his apartment building. In despair, he had thrown himself out the window of his thirteenth-floor New York City apartment sometime during the night. He died believing he was a failure, and that FM radio would never become accepted. Through the years Armstrong’s widow would bring twenty-one patent infringement suits against many companies, including RCA. She eventually won a little over $10 million in damages. But it would take further decades for FM radio to reach its potential.

Behind every great Jewish fortune you will find a great crime, and there can be no doubt that is certainly the case with David Sarnoff, who was just as much a gangster as he was a ‘respected businessman’.

But Edwin Armstrong is just one of many America inventors who were robbed blind by Jews — including Thomas Edison who invented the movie projector, which Jews literally stole, took to California, and built the Hollywood movie industry on its back without giving Edison one single dime.

And despite Israel’s recent public relations attempt to portray itself as the Start-Up Nation™, Jews have never invented anything of substance — say what you want about White Europeans, but we have invented virtually everything of lasting significance in the modern world, and the Jews are completely reliant on us to keep it going.

And the only way Israel is going to be an international “hub” of technology is for them to do exactly what Jews have always done: steal technology from White inventors and use companies in Israel to market those technologies to the world, while taking undeserved credit for it all.

Edwin Armstrong’s life and death encapsulates exactly what is happening to the White race today.

We obviously have not learned anything from history.