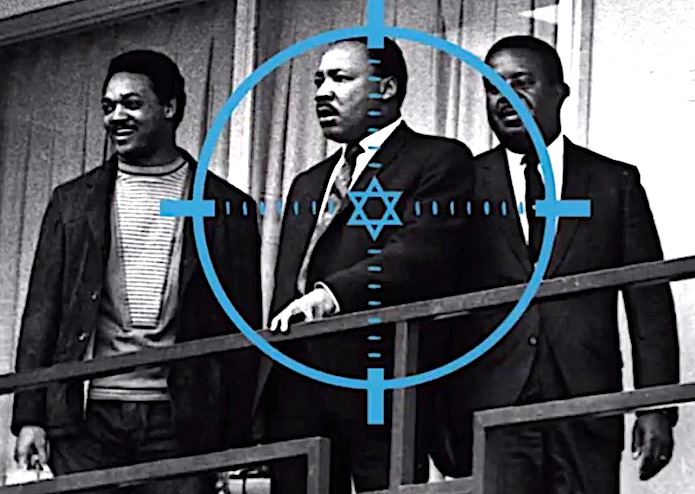 (Medium.com) Every year around Martin Luther King Day, we get the same propaganda repeated all over again about how Martin Luther King loved Israel and was a pro-Zionist, despite the fact that the evidence to support this claim is a complete hoax:

Over the years, Martin Luther King Jr’s sympathetic view of Israel has been enthusiastically exploited by Zionists. If you want to defend a racist state based on the dispossession and continued systematic oppression of the Palestinian people, it is obviously helpful to be able to cite the support of a noted anti-racist. Indeed, at one point pro-Israel propagandists thought they had struck gold with the publication in 1999 of Marc Schneier’s Shared Dreams: Martin Luther King, Jr and the Jewish Community, which quoted extensively from a “Letter to an Anti-Zionist Friend” supposedly written by King. The letter included the following passage:

‘You declare, my friend, that you do not hate the Jews, you are merely ‘anti-Zionist.’ And I say, let the truth ring forth from the high mountain tops, let it echo through the valleys of God’s green earth: When people criticize Zionism, they mean Jews — this is God’s own truth. Antisemitism, the hatred of the Jewish people, has been and remains a blot on the soul of mankind. In this we are in full agreement. So know also this: anti-Zionist is inherently antisemitic, and ever will be so.’

For the Israel lobby, this emphatic endorsement by King of the bogus “anti-Zionism = antisemitism” argument must have seemed too good to be true. Unfortunately for them, it was. The “Letter to an Anti-Zionist Friend” was long ago exposed as a hoax, although it continues to be quoted on occasion by Zionists. The fall-back position adopted by its former advocates, however, is that while the letter may technically be a forgery, this is of no great significance because it nevertheless represents King’s actual views on Israel. They point in particular to the words attributed to King by the Harvard sociology professor Seymour Martin Lipset (“When people criticize Zionists, they mean Jews”), which appear in the image macro at the top of this article. Here is Lipset’s account of how King came to make that alleged statement:

“Shortly before he was assassinated, Martin Luther King, Jr. was in Boston on a fund-raising mission, and I had the good fortune to attend a dinner which was given for him in Cambridge. This was an experience which was at once fascinating and moving: one witnessed Dr. King in action in a way one never got to see in public. He wanted to find what the Negro students at Harvard and other parts of the Boston area were thinking about various issues, and he very subtly cross-examined them for well over an hour-and-a-half. He asked questions, and said very little himself. One of the young men present happened to make some remark against the Zionists. Dr. King snapped at him and said, “Don’t talk like that! When people criticize Zionists, they mean Jews. You’re talking anti-Semitism!”

Lipset, it must be said, was hardly a neutral witness. Having been a follower of Max Shachtman during his radical youth, he had broken with Trotskyism in the early 1940s to embrace social democracy, before moving over to the right wing of the Democratic Party and becoming, as the New York Times put it in his obituary, “one of the first intellectuals to be called a neoconservative”. As he abandoned socialism and shifted rightwards, Lipset also became a firm supporter of the state of Israel. “Starting with the Six Day War in 1967”, he later recalled, “I became very active in campus-related Jewish groups.”

…Kramer claimed that Lipset “preserved King’s words … by publishing them soon after they were spoken”. But Lipset’s account was in fact published over two years later, in the December 1969 issue of the CIA-funded magazine Encounter. (In the US the article, titled “‘The Socialism of Fools’: The Left, the Jews and Israel”, was also published as a pamphlet by the Anti-Defamation League, who have become notorious for conflating opposition to Israel with antisemitism.) While Lipset probably recalled the general thrust of King’s remarks accurately enough, unless he took shorthand notes it is far from certain that he was able to provide a verbatim quote.

The jewish-controlled press intentionally misleads the public into believing that MLK was pro-Israel for a very simple reason: by portraying MLK as pro-Israel, it hides a major motivation that the Mossad and Jewish organized crime had to target King for assassination.

The Jewish press uses a similar strategy with the Kennedy clan, whom they seem to fawn over as icons of liberalism, while many Zionist Jews secretly hate them because of the Kennedy’s private antisemitism and their opposition to Israel’s quest to build nuclear weapons.

Not only was Martin Luther King a supporter of the Palestinian cause, it was probably his support that ultimately made him expendable to the Jews who had built up his legend as a liberal icon.

In the wake of the 6-Day War in 1967, King became more and more unreliable — and if he were able to convince Black (and White liberal) America to turn against Israel, it would be a public relations disaster for the Jews.

As author Michael Collins Piper, points out in the video below, James Earl Ray, the White man falsely accused of the murder, believed that Israel’s “fingerprints were all over the assassination of Martin Luther King.”