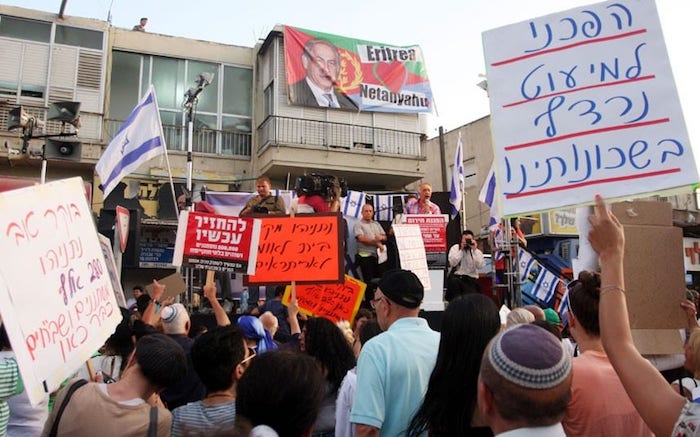 Prominent members of Bibi Netanyahu’s governing Likud Party in Israel are blaming the pro-immigrant jewish victims of the mass killing at the synagogue in Pittsburgh for causing the antisemitism that lead up to it:

Israeli Minister of Education Naftali Bennett has embarked on a visit to Pittsburgh “to be with our sisters and brothers in their darkest hour,” he said, after a neo-Nazi supporter of President Donald Trump massacred eleven Jewish worshippers at the city’s Tree of Life Synagogue.

Robert Bowers, the right-wing terrorist, targeted the progressive congregation on the basis of its partnership with the Hebrew Immigrant Aid Society, or HIAS, a Jewish non-profit that helps refugees from conflict-torn regions obtain asylum in the US.

“HIAS likes to bring in invaders that kill our people,” Bowers stated in a social media manifesto explaining his motives.

As Bennett departs for Pittsburgh, some members of Israel’s governing Likud Party have issued talking points and statements blaming the victims of the anti-Jewish mass murderer for inspiring the attack. One especially prominent Likud member has even echoed Bowers’ hate manifesto.

Hours after the massacre in Pittsburgh, a Likud Party email listserv pumped out talking points addressed to “ambassadors of the Likud” that claimed the anti-Jewish shooter “drew inspiration from a left-wing Jewish group that promoted immigration to the U.S. & worked against Trump.”

Within moments, Likud party activists like @guyshapira took to Twitter to repeat the talking points word for word. (Shapira followed up by promoting a tweet by the American Jewish alt-right personality Laura Loomer likening the killer to Ilhan Omar, a Democratic candidate for Congress who happens to be Muslim.)

The listserv comments were hardly an outlier within the Likud Party’s digital fever swamps.

In a Facebook post, Yoav Eliasi, aka The Shadow — a prominent Israeli hate rapper and Likud Party member in good standing — portrayed the massacre as a legitimate response to HIAC’s progressive agenda.

According to Eliasi, Bowers “was a man fed up with subversive progressive Jewish leftists injecting their sick agendas” into his country. Explicitly echoing the neo-Nazi’s manifesto, Eliasi added that “HIAS brings in infiltrators that destroy every country. The murderer was fed up with people like you. Jews like you brought the holocaust and now you’re causing antisemitism. Stop bringing in hate money from Soros.”

While grassroots Likud leaders appeared to justify the massacre, Israel’s state-funded Chief Rabbi, David Lau refused to recognize Pittsburgh’s Tree Of Life as a synagogue. Rejecting the terror-stricken congregation on the basis of its alignment with Conservative Judaism, which the Orthodox Jewish establishment regards as illegitimate, Lau referred to the synagogue as “a place with a prominent Jewish mark.”

In recent years, racist anti-refugee politics have overwhelmed Israeli society. In our mini-documentary, “Israel’s New Racism,” Israeli journalist David Sheen and I documented the role of xenophobic vigilantes in influencing the agenda of the country’s right-wing governing coalition. In an article earlier this year, Sheen explained how the anti-refugee policies of Israeli Prime Minister Benjamin Netanyahu were “inspiring white supremacists all over the world to advocate adopting these policies as their own.”

Back in 2012, Naftali Bennett published an anti-refugee manifesto that advanced many of the same concepts as Bowers’ social media rant against HIAS. “There is a plague of illegal infiltrators in the State of Israel,” Bennett wrote on Facebook. He went on to blame the New Israel Fund, a liberal non-profit, for “bringing horror & crime to Tel Aviv” by defending asylum seekers against deportation.

With Bennett on his way to Pittsburgh, his right-wing Jewish Home party has delayed hearings in the Knesset on an “anti-infiltration” bill authorizing the government to jail and deport all asylum seekers in Israel.

All Jews are liberal whether they are on the Left or Right, but among the Jews themselves, there have been serious internecine battles with the hardcore Likud pro-Zionist Jews allied against the ultra-liberal Soros/Hollywood Jews, who are the most vocal pro-immigrant groups in America and Europe.  The Likudniks obviously understand that Jews themselves create antisemitic “blowback” among the “goyim” when they “proudly” advocate open borders and generous welfare benefits for migrant invaders.  On the other hand, the “liberal” Jews on the Left are in complete denial that jewish behavior has anything to do with antisemitism.

And here we have it from the Jews’ own mouths — jewish pro-migrant organizations like HIAS destroy every country in which they operate.  That’s not a “white supremacist” saying that — it’s prominent Jews saying that.  Jewish liberalism wrecks nations, so say Jews themselves, but if non-Jews say the same thing, we are branded as antisemites.

Jews are now saying that the recent killings were the result of jewish nation-wrecking pro-immigrant policies, but the liberal jewish-controlled media will never let the American people know this truth about themselves for fear of another, even larger, pogrom than what happened in Pittsburgh.