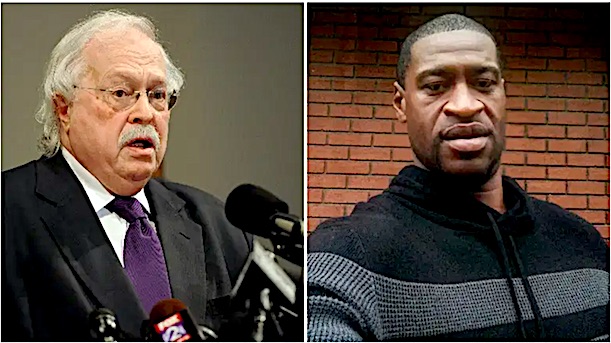 Dr. Michael Baden, the Jewish ‘celebrity pathologist’ and ‘fixer’ who recently reversed Jeffrey Epstein’s official cause of death from suicide to murder, has released the results of his ‘independent’ autopsy of George Floyd, which predictably contradicted the original autopsy results released by the Hennepin County Coronor:

The attorney for George Floyd’s family released the results of an independent autopsy showing that Floyd died from asphyxia caused by sustained pressure.

The autopsy found that the compression cut off blood to Floyd’s brain and that the weight on his back made it difficult to breathe, according to announcement from the family’s attorney, Ben Crump.

The independent autopsy differed from the official autopsy, which included being restrained, as well as underlying health issues and potential intoxicants in Floyd’s system. That autopsy also said it found nothing “to support a diagnosis of traumatic asphyxia or strangulation.”

Floyd died last week following an arrest where an officer knelt on his neck for eight minutes. His death has sparked national protests and riots.

Amazing how this ‘celebrity pathologist’ and media whore seems to turn up for many politically-charged deaths — and provide the ‘expert’ opinion to muddy the waters and overturn official conclusions.

Baden’s so-called ‘autopsy report’ — which hasn’t been released to the public — ignores Floyd’s inconvenient pre-existing heart condition and high levels dangerous drugs in his system, including heart-stopping fentanyl and methamphetamine — and concludes that he was essentially ‘strangled’ by the police officer who was restraining him — supporting the false contention that Officer Chauvin ‘murdered’ Floyd.

Let’s not forget that Baden just so happened to also perform an ‘independent’ autopsy of Michael Brown, another high-profile racially charged death.

Of course, there is nothing ‘independent’ about Baden’s opinion masquerading as an ‘autopsy’ — he’s essentially a paid shill to deliver a predetermined conclusion that will help Floyd’s family sue the City of Minneapolis for wrongful death — and provide a pseudo-scientific justification for the nation-wide rioting and looting by Black anarchists.

And notice the media is not demanding to see Baden’s actual ‘autopsy’ — with evidence, photographs, etc. — because there’s no proof that Hennipin County ever released the body to Baden to examine it.

The Jewish-controlled media and Jewish advocacy groups are using the death of George Floyd to incite a race war in America, which is why they’ve enlisted Michael Baden, one of their most reliable sayanim or ‘helpers’ whose ‘expert’ opinion will further fan the racial flames.