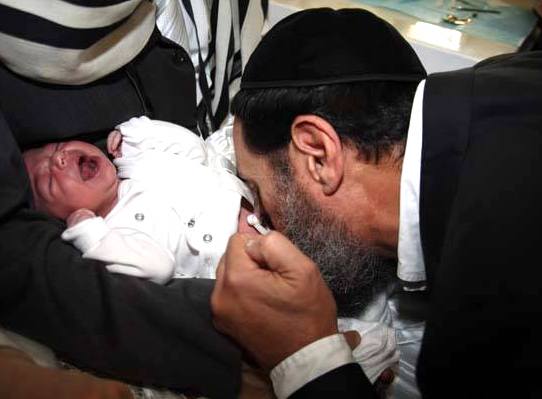 The heads of the Conference of Presidents of Major American Jewish Organizations have publicly condemned a Swedish political party which recently voted in favor of banning male circumcision performed by non-licensed medical doctors:

“We are appalled to learn that a political party in Sweden has proposed a ban on non-medical circumcision of infant boys. This proposal, put forward by members of Sweden’s minority Center Party, would be an outrageous violation of religious freedom and civil rights,” said Stark and Hoenlein in a statement.

“The Conference stands with Sweden’s Jewish Central Council in condemning this blatantly discriminatory legislation. We call on the government to reject this initiative quickly and absolutely,” they added.

The Swedish Center Party voted on Saturday 314-166 at its annual meeting to work to fight the non-medical circumcision of boys. Party chief Annie Loof was among the party leaders who criticized the vote.

The Center Party received approximately 8 percent of the votes in last year’s national election, earning 31 seats in the 349-seat parliament. It broke with its center-right alliance earlier this year and now backs the left-wing ruling coalition, though it’s not officially part of the bloc.

The vote drew fierce debate in the country between advocates, who say circumcision infringes on children’s rights, and critics, who say a ban would threaten the country’s Jewish and Muslim populations.

Last year, a leader of the Sweden Democrats party submitted a draft motion calling for a ban on non-medical circumcision of boys, which the text claimed is “backward” child abuse.

Let’s be clear: Sweden doesn’t object to circumcision as long as it is done by a licensed and properly-trained physician in a controlled and sterile setting, like a doctor’s office or hospital.

But the Jews are insisting that it is their “human right” to have an common rabbi perform this delicate surgery, which involves many serious risks.  The Jews do not like to admit that every year infant males actually die from complications from circumcisions, even ones performed by licensed doctors.

Not only that, Jewish ritual circumcision involves the rabbi literally sucking the blood off the infant’s penis, a completely disgusting an unhygienic act that often transmits herpes to the child, which can have catastrophic consequences.

But according to The Talmud, a rabbi must perform the circumcision because “The holy soul only enters the child at the point of circumcision.”  So apparently if a medical doctor performs the circumcision, allegedly the soul will not enter the body, and the little Jewish boy will live his entire life without a soul.

In the video below, a rabbi explains why the blood must be sucked off the penis during circumcision — ironically for hygienic reason, and apparently to help the blood coagulate faster, but knowing the Satanic nature of Babylonian Judaism, the real reason they must perform this blood ritual is kept secret from the goyim, which is why the video ends before the rabbi “speculates” about the “real” reason, the video ends abruptly: