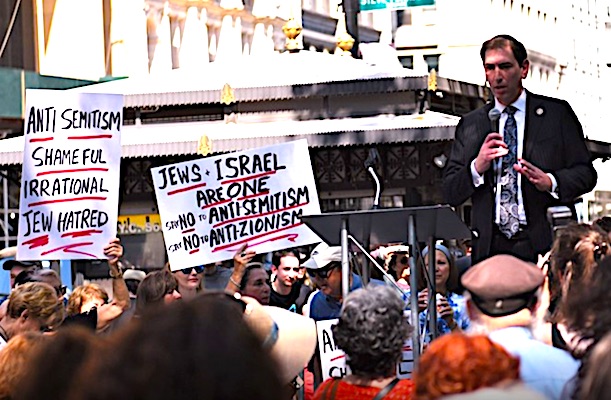 The Black-on-Jew violence in New York City has reached such intolerable levels that a rally against “hate” was organized at City Hall where members of the jewish community demanded that City and Black leaders do something to stop the ‘antisemitic’ violence:

Speakers at the rally called on Congress, New York City’s Mayor Bill de Blasio, African American leaders including Al Sharpton, the media, and Jews themselves, to call out and put a stop to anti-Semitism.

Hikind said, “It’s out of control and the mayor needs to declare a state of emergency!” Hikind asked why New Yorkers should be afraid to walk the streets in 2019, as he decried the current situation, “Jewish blood is running in the streets.”

…Expressing disappointment that more Jewish leaders did not attend the “Say No to Hate” rally, Rabbi Aryeh Spero chastised the leaders of well-known Jewish community organizations including the ADL, AJC, and Conference of Presidents who he said will only attend “fancy meetings” in New York City offices but abandon the lone Jew on the street.

…Other speakers included Nisi Jacobs, Founder and CEO of WoMen Fight anti-Semitism, who lambasted Senator Chuck Schumer (D-NY), saying he lives one neighborhood away from Crown Heights where bricks are thrown at Jewish men’s heads, Jewish men are belted in the head in broad daylight, and 21 year old hassids are jumped on their way to work, but Schumer still refuses to acknowledge it.

Contrary to Mayor de Blasio who blames these anti-Semitic attacks on white supremacists instead of calling it what it is, Jacobs said, “There is not a single white supremacist in the Crown Heights neighborhood.”

Jews who choose to live in urban areas in close proximity to Blacks are going to be victims of violent crime, and it’s not because they are “identifiable” Jews that they are being targeted; rather, they are being targeted because Blacks will choose easy victims wherever they come across them, and that’s the price you pay for life in the Big City.

And Jews are foolish to expect Mayor deBlasio, who is married to a Black woman and has Black children, to single-out Black criminals in the city.  After all, he even refuses to admit that Black gangs commit mass shootings.  And Chuck Schumer won’t touch this problem because it will alienate the Black Democrat voters on a national level.

And the ADL won’t touch this because it doesn’t involve “White supremacists” attacking Jews, and the ADL’s new campaign is to fight the fake “international” White supremacy “network”.

Jews in New York City already have their own powerful private security forces, so maybe it’s time for them to take a page out of the playbooks of the JDL and send a clear and unambiguous message to the ‘African-American street thugs’ that this won’t be tolerated in a language that they will understand.