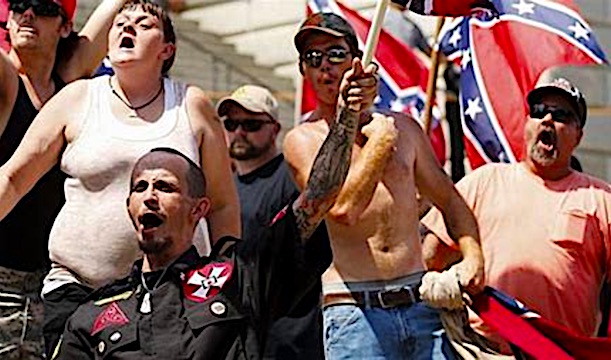 Racist extremist groups, including neo-Nazis and other White supremacists, are allegedly encouraging members who contract novel coronavirus disease to spread the contagion to cops and Jews, according to intelligence gathered by the FBI:

In an alert obtained by ABC News, the FBI’s New York office reports that “members of extremist groups are encouraging one another to spread the virus, if contracted, through bodily fluids and personal interactions.”

The FBI alert, which went out on Thursday, told local police agencies that extremists want their followers to try to use spray bottles to spread bodily fluids to cops on the street. The extremists are also directing followers to spread the disease to Jews by going “any place they may be congregated, to include markets, political offices, businesses and places of worship.”

“Anti-government folks in America love to target law enforcement as a symbol of America’s authority,” said Don Mihalek, the executive vice president of the Federal Law Enforcement Officers Association Foundation and an ABC News contributor. “It’s just sad that that’s their focus at a time of crisis in the nation.”

Strangely, as told by the jewish Forward, this alleged report was not issued by the FBI but rather by the Federal Protection Service, a division of Homeland Security, and it made not specific mention of Jews as targets:

Multiple white supremacists have discussed using the novel coronavirus as a biological weapon, Yahoo News reported on Saturday, citing a document from a division of the Department of Homeland Security.

An intelligence brief issued Feb. 24 by the Federal Protective Service, which protects federal government buildings, claimed that “White Racially Motivated Violent Extremists have recently commented on the coronavirus stating that it is an ‘OBLIGATION’ to spread it should any of them contract the virus.”

The memo, which was based on online conversations on the messaging app Telegram that the government had gained access to, claimed that some extremists had proposed targeting government offices as well as minority communities. Among the ideas proposed included having infected white nationalists purposefully spend time in non-white neighborhoods in order to infect others, as well as leaving “saliva on door handles” and spitting on elevator buttons in office buildings.

The Telegram channel is devoted to “accelerationism,” the idea that inciting or conducting violent attacks on minorities and the government will accelerate the creation of a white ethno-state.

DHS did not respond to Yahoo News’ requests for comment.

The fact that the Department of Homeland security would not respond to Yahoo News’ requests for comments suggests that this story is a complete fabrication, probably leaked to the media by the Anti-Defamation League in order to keep its absurd ‘White supremacists are domestic and international terrorists’ propaganda campaign in the new cycle.

Imagine a group of ‘White supremacists’ believing that by putting saliva on door knobs they can help usher in a White ethno-State.  Only jewish writers who work for Marvel comics or Netflix could up make this kind of far-fetched propaganda.

This fake news is not only an insult to the intelligence of all White people, but Jews themselves should also be offended as this paranoia-inducing propaganda targets them in order to make them falsely believe that the ever irrational goyim are secretly plotting a ‘new’ Holocaust by any means necessary, including ‘weaponizing’ the common seasonal flu virus by licking door knobs.