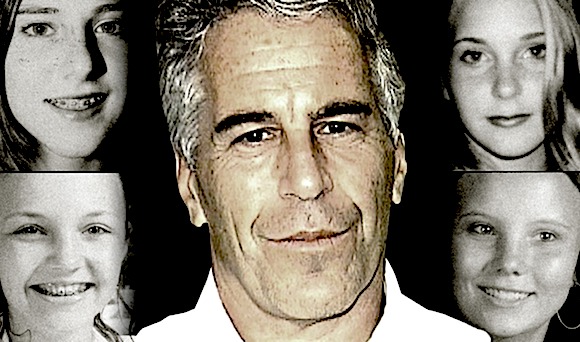 Jews are literally “cringing” not at the horrific crimes against underage children perpetrated by Jeffrey Epstein and his famous friends, but rather at how ‘jewish’ Epstein’s name is, and how it will give “antisemites” more proof to support their “irrational hatred” of Jews:

When I heard that Jeffrey Epstein had been arrested on sex-trafficking charges, I cringed. I’m sure I was not the only Jewish person who did, or whose first thought was, ‘Why does this sorry excuse for a human have to be Jewish?’  And I probably also wasn’t the only Jewish person whose second thought was, ‘Given that he is Jewish, why does he have to have such a Jewish-sounding name?’

It’s a natural response to a people who have been hounded by anti-Semites, to cringe when one of our own behaves in such a horrifying manner.  And of course, it didn’t take long for the anti-Semites to crawl out of their holes with the reactions that prompted mine.

It may be natural to fear the wrongdoing of our own not just for its moral ugliness but for the attacks against the rest of us that such wrongdoing will surely engender.  But it’s also a fallacy.

As Holocaust scholar Deborah Lipstadt once told me when I interviewed her about her book, Antisemitism: Here and Now, it doesn’t matter how Jews behave. Anti-Semitism is not based on anything rational. Rooted in a mythology of secret Jewish power, money, control, and dual loyalties, anti-Semitism and Jewish wrongdoing have little to do with each other.

We all cringe as Jews when one of our own, with such a Jewish-sounding name, turns out to be a horrible person (and it doesn’t get much more horrible than being a child rapist). But cringing over Jewish deplorables is at the end of the day something of a category error.  It’s the wrongdoing, not the Jewishness, that should horrify us.

After all, anti-Semitism is a virus that does not depend on the behavior of actual Jews.  They would hate us, anyway. Lipstadt compares anti-Semitism to herpes — “It’s disgusting, but it doesn’t go away.  Come a moment of stress in society, come a moment of tension into someone’s life, it can pop up,” she said. Anti-Semitism is the herpes in society.  “It keeps asserting itself at times of tension, at times of dislocation, and that’s one of the reasons we’re seeing it.”

This is why if Israel went away, or if Zionism had never existed to begin with, so-called “left-wing anti-Semitism” would still be around; it would simply have taken another form.  Anti-Zionism is the excuse, the drawing-room and academic-conference respectability the anti-Semitism virus feeds upon.  But it can always find something else.

It’s the same with Epstein.  Any anti-Semite using Epstein as an excuse to beat up on Jews would have found another excuse, too.

Just as Muslims should not be forced to denounce “bad apples” among their own, Jews should not have to feel any special obligation to denounce Epstein just because he’s a Jew.

We can reverse engineer a Jewish success story to make it about their Jewish upbringing, but then we have to accept the other side of the coin: Is it his Jewishness that makes Epstein a horrible person?  The anti-Semites will say yes (and they already have), but we don’t need to fall into the trap of claiming “Not all Jews.”

Many Jews are especially angry at their fellow Jews who are in the public eye for misdeeds.  They are angry because they’re Jews, and so should have had a better understanding of what it means to act unethically.  While understandable, it’s still playing by the anti-Semites’ rules.

Instead, condemn the man for his misdeeds, but leave the Jews out of it.  Epstein isn’t going to contribute to anti-Semitism.  If it wasn’t Epstein, it would be somebody else.

So basically the Jews want their cake and eat it, too.  As the writer of the piece above admits, when a Jew is successful, they want to attribute that success to his or her jewish racial identity, but when a Jew engages in criminal or evil doings, they hypocritically recoil at the very notion that it has anything to do with jewishness.  It is jewish hypocrisy that is, at its heart, completely irrational, whereas “antisemitism” is merely the result of recognizing that hypocrisy and demanding that Jews come to terms with it and recognize it for what it is.

If it was acceptable for Jesus Christ to call Jews out on their hypocrisy, then it should be acceptable for any and all Christians to follow by His example.  Jews suffer not from “irrational” criticism but rather from the lack of it.  Jews need to be held accountable, not only as individuals but as a group, but the fact that they refuse to be accountable in this way is yet more proof that they cannot possibly be true descendants of the Israelites of the Old Testament, who repeatedly accepted God’s chastisement both for their individual behavior and for their collective sin as a people.  Perhaps it would be in everyone’s best interest if Jews would simply give up this charade that they are Israelites and accept who they really are: double-minded hypocrites of dubious racial identity.