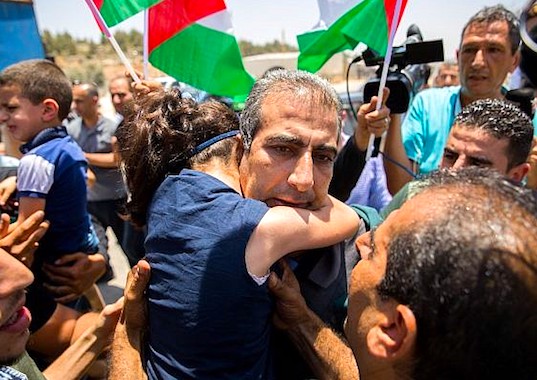 With echoes of the Leo Frank rape-murder case in 1913, the Israel Defense Forces’ military advocate general announced Tuesday morning that he was dropping the charges against a Palestinian man falsely accused of brutally raping a seven-year-old Israeli girl:

The indictment against Mahmoud Qadusa had come under fire for its apparent lack of evidence, a fact that the military prosecutor, Sharon Afek, acknowledged in a statement to the press announcing the annulment of the charges.

The statement said that “the evidentiary infrastructure that underlies the indictment does not at this time amount to a ‘reasonable chance of conviction.’ Therefore, by law, the criminal process cannot continue, the indictment must be withdrawn and Qadusa released from custody.”

The MAG’s announcement was released hours before a military court was scheduled to hold a remand hearing for Qadusa.

The suspect’s lawyer said the decision was “better late than never,” but blasted the court for having allowed his client to remain in jail for nearly two months. He is slated to be released later on Tuesday.

Qadusa, a 46-year-old maintenance custodian at the alleged victim’s school in an ultra-Orthodox settlement in the central West Bank, was arrested 55 days ago.

According to the dropped charges, sometime “between the months of February and April” Qadusa dragged the girl from her school to a vacant home in the settlement, where he raped her as at least two of his friends pinned her down.

Police kept the case under gag order until after they had filed the indictment last Sunday. The charges were met with a flurry of posts on social media that concluded the crime had been an act of terrorism due to the fact that the suspect was a Palestinian.

But days after the indictment was leaked, police came under fire for relying almost entirely on the testimony of the seven-year-old victim, forgoing forensic evidence in addition to being unable to determine the exact date that the alleged crime had taken place.

The official also confirmed that the seven-year-old girl was only able to ID Qadusa in school after her mother pointed at him first and told her he was the man who had raped her.

Moreover, a failed polygraph test cited by the military court in successive decisions to extend Qadusa’s arrest was carried out in Hebrew, rather than the defendant’s native Arabic, the official said.

In 1913, a jury concluded that Leo Frank, a jewish factory manager in Georgia, had raped and murdered Mary Phagan, a 13 year old girl who worked at the factory and had falsely blamed his crime on a Black janitor, Jim Conley.  High-powered Jews from New York traveled down to Georgia to defend Frank, but were unsuccessful in attempting to have his capital murder conviction overturned upon appeal.  They then pressured the Governor of Georgia to commute his death sentence to life imprisonment, at which point outraged local residents, fearing that Frank would get away with his crime, dragged him out of the jail and publicly lynched him.

To this day, Jews irrationally insist upon Frank’s innocence, and have written many books in his defense, but they fail to explain one obvious and glaring problem: in the eyes of the Black janitor, Leo Frank was a “White” man, and there is no way a Black man in 1913 would have dared rape and murder a White child in front of a White witness, as Frank alleged.  From this case arose the foundation of the Anti-Defamation League whose purpose was to defend any Jew anywhere against “antisemitism”.  Even though Jews themselves have admitted that pedophilia is rampant in jewish communities, they nevertheless feel compelled to defend Leo Frank contrary to all common sense.