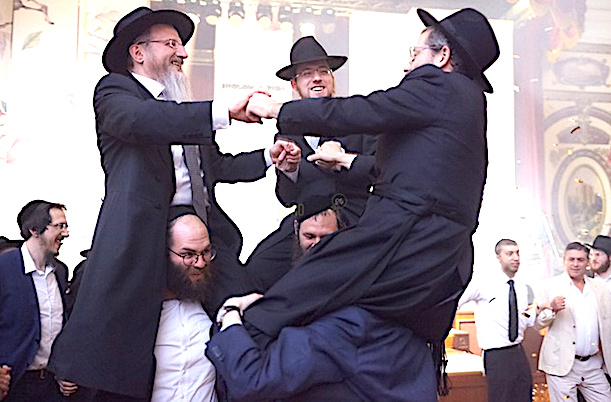 The normally suspicious and insular Jewish Orthodox communities in the New York metropolitan area are being encouraged to overcome their distrust of outsiders to fill out the 2020 Federal Census forms so that these welfare-dependent communities can receive even more benefits:

Every ten years, local municipalities and states must be counted in order to proportion representatives. Since then, every level and type of government assistance has been based on the Census. When the census numbers come out, those are the numbers that the government has to abide by when they appropriate: members of Congress, Section 8 Housing Vouchers, Head Start programs, food stamps, Medicaid, Medicare, Title I, and almost any other program.

Everything from affordable housing to welfare is determined by the census. One very important such service is the Child Care Block Grant which allows so many of our Yeshivas to stay afloat.

So why should I care? How will it impact me? Even if the impact is not clear and tangible to you at first glance, it truly influences you and our community. If your child requires a Head Start program or if you require a Section 8 Voucher or any type of government assistance, all of those means of support are predicated on the actual census.

Imagine, if Boro Park reported near 100% in the census how many more Section 8 Vouchers we could receive, how many more families we could keep together. If you are not counted, there is no way governments can include you and your whole community.

Yes, our City has less than ⅔ reporting for the census, but our community is even more under reported. When the census was taken in 2010 less than 50% of Boro Park filled it out, at the time the lowest reporting percentage from any neighborhood in the entire City.

Currently, the Boro Park community is the second lowest at 43%. Other Jewish communities are not much better. Experts say for every person who doesn’t fill out the census, social services for that area are reduced by more than $1,000. That means that every single person in our community that does not fill out the census is responsible for those in our community who need government assistance but couldn’t receive it.

In Boro Park, where our communities and institutions are growing immensely, Bli Ayin Harah, people are still suffering to make ends meet.

It may not be you or your relatives, but every person in our community knows at least one person, from Shul or Yeshiva or even work, who is struggling: struggling to pay rent, to buy food, to pay tuition.

Regardless of how you feel about the state’s responsibility to the needy, these systems exist, and we would be fools not to take part in them. An integral part of that participation is the census.

For those who feel our community is not given the amount of representation in government we deserve, the census is the one way to solve your problems. The representatives of our community certainly do a good job and stand for our values B”H, but fact-is-fact the more numbers you have in the legislature the more power you have. If we would respond more, we would have more representatives in all levels of government representing our neighborhood in which we reside.

In other words, Boro Park could have their own City Council Member, along with Midwood and Flatbush. This has nothing to do with partisan politics. This is just simple arithmetic.

We kvetch so much but we just don’t get it: when it comes to being proactive, we fall down on the job. Kvetching gets you nowhere unless it is followed by tangible action. Everyone must internalize this message.

I quite literally cannot emphasize this enough: this is a once in ten-year opportunity. If the last few months of upheaval have not been the wakeup call that we need to do all we can to make our voices heard as much as possible then we must be deaf, blind, and ignorant. I urge everyone to stop what you’re doing and call 1-800-923-8282 or go to https://my2020census.gov/ and respond to the census. You have until September 30th, 2020 to do so.

One of the dirty little secrets of the Orthodox communities in America is how dependent they are on the welfare system.

Orthodox Jews have very large families, but the able-bodied fathers do not work — they want to be able to sit around all day studying the Talmud and their tax-payer supported yeshiva.

And because of the high incidence of genetic disorders among Jews, many of their children have expensive medical conditions that would bankrupt normal, working class families.

So a family of, say, eight qualifies for every kind of public hand-out available, from subsidized house and private Jewish schooling, to monthly cash allowances, free medical care, and even free cell phones.

In fact, a “disproportionate” number of Orthodox Jewish families are on some sort of welfare than Black families in New Jersey, according to one investigation of massive welfare fraud.

And while Jews will tell you that welfare fraud among the Orthodox is an antisemitic “smear”, the numbers speak for themselves — and the levels of fraud in these communities is tantamount to organized crime.

Orthodox Jews are masters at the concept of “unreported income” and they know how to hide it — whether it’s a million dollar corporation, large inheritances, or under-the-table cash from the network of sayanim at their local synagogue or Jewish Community Center.

One prosecutor in New Jersey observed this about a typical Orthodox welfare family:

And going after welfare fraud in these Jewish communities is a political minefield, as virtually everyone accused of fraud is the child or grandchild of a “Holocaust survivor” who “doesn’t understand the complex rules” of welfare.

We are all told how much smarter Jews are than the rest of us mere mortals, yet they can’t figure out how to avoid welfare fraud — at much higher rates than their often Black neighbors.

And if they all fill out their 2020 Census forms, even more free cash will flow into these “needy” neighborhoods.